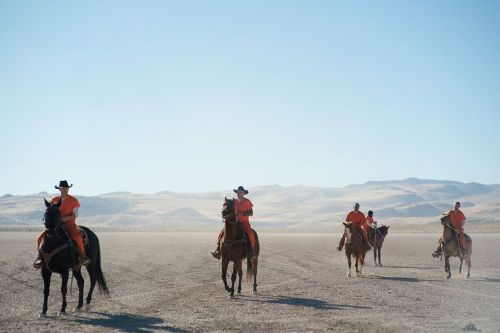 Anchored by a livewire performance from the compelling Matthias Schoenaerts, the movie uses the Wild Horse Inmate Program, already the nonfiction subject of John Zaritsky’s “The Wild Horse Redemption” and Andrew Michael Ellis’ “The Wild Inside,” as a heartfelt and human endorsement of second chances.

Schoenaerts’ hard-timer Roman Coleman, incarcerated in the Northern Nevada Correctional Center, slowly but surely finds a positive pathway forward once he joins an unusual cohort of fellow inmates allowed to train horses, in preparation for public auction/adoption of the magnificent animals.

Administered by the United States Department of the Interior’s Bureau of Land Management, the horse program’s pairing of convict and wild animal provides Clermont-Tonnerre, writing with Mona Fastvold and Brock Norman Brock, the ideal vehicle for elegant and streamlined metaphor construction.

Will Roman tame the mustang that comes to be known as Marcus or will the mustang tame Roman? Or are certain spirits beyond breaking? We can hazard a guess, but the only person in the movie in possession of Yoda/Miyagi/McGonagall-level foresight is Bruce Dern’s crusty, temperamental Myles, the rancher who runs the show. He sees something in Roman that Roman certainly cannot.

While the principal plot revolves around Roman’s volatile and evolving relationship with the horse assigned to him, Clermont-Tonnerre fills out the main character’s background via a series of tough visiting-day interactions between Roman and his daughter Martha (Gideon Adlon, 180-degrees from her comic touch in “Blockers”). The anger, pain, and bitterness felt by Martha parallels the similar dynamic between Jake and Jesus Shuttlesworth in Spike Lee’s “He Got Game.” Later, Martha’s personal safety is threatened and Roman’s response will layer the melodrama with an anxious tension.

Not all of Clermont-Tonnerre’s story moves hold up under logical scrutiny, but “The Mustang” succeeds despite its familiarity.

Some viewers may feel that the talents of supporting actor Jason Mitchell, as program veteran Henry, are squandered -- particularly because a subplot revolving around the inside theft of ketamine does not develop into a larger part of the story. I defend Clermont-Tonnerre’s deliberate use of both Mitchell’s character and the drug smuggling thread, and believe both are executed with precision alongside the principal struggles experienced by Roman. Without spoiling any details, Roman’s relationship with Henry ultimately comes to serve as a stark reminder of the dire conditions behind bars.

The built-in training timeline, notable for its brief turnaround of just a few months (somewhat parallel to the 120 or so days of inmate/horse work at the actual facility), foreshadows the inevitable separation of animal and caretaker, but Clermont-Tonnerre finds a fresh, unexpected outcome for the Roman/Marcus bond.

The moments in which Roman labors to make progress in the corral are not quite as breathtakingly realized as similar sequences in Chloe Zhao’s “The Rider,” but both films effectively compose the particular, wordless poetry that can only be found in the best examples of the American mythology of the equestrian.