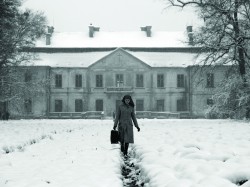 Warsaw-born, UK-based Pawel Pawlikowski delivers one of the year’s most rewarding cinematic experiences in “Ida,” a stark, monochromatic treasure set in Poland in 1962. Quiet, introspective and deliberate on the outside, the movie’s interior life is by contrast filled with the most tumultuous emotional upheaval imaginable. Raised by nuns and now on the verge of becoming one herself, Anna is instructed by her mother superior to seek out the aunt she never knew she had. Reluctant but obedient, the young woman meets Wanda, a weary judge who numbs her own sorrow with alcohol and one-night stands. The novice’s earnest piety is tested by Wanda’s flinty pragmatism, especially when Wanda reveals that “Anna” is really Ida, a Jew whose parents were killed during World War II.

Aunt and niece begin a journey of discovery to find out the details of the fate of Ida’s parents, traveling by car through bleak landscapes en route to knowledge that might bring as much pain as peace. As Ida, newcomer Agata Trzebuchowska is, in her own way, every bit as mesmerizing as Emily Blunt’s enigmatic Tamsin in Pawlikowski’s excellent “My Summer of Love.” Trzebuchowska’s performance is perfectly complemented by the work of Agata Kulesza as Wanda, and both actors communicate the steadily developing respect that each character reluctantly earns from the other.

Pawlikowski’s unusual road movie functions on several planes, from the horror of the Holocaust and the political fallout of Poland’s post-Stalin era to the pragmatic debate between the tangible pleasures of the material world and the unknown territory of life everlasting. Identity, particularly in terms of the revelation that the main character is not the Catholic Anna but instead the Jewish Ida, is paramount. In Ida and Wanda, the oddest of couples, the differences are starkly outlined. One believes and the other does not. One is a virgin and the other demonstrates a worldly sexual appetite. One has grown up in ignorance of the grim events that stole her family while the other has lived with that knowledge every day for nearly two decades.

Shot in the squarish 1.37:1 Academy aspect ratio of bygone cinema by photographers Lukasz Zal and Ryszard Lenczewski, “Ida” is filled with meticulous compositions that command attention. Pawlikowski frequently places characters low in the frame, exaggerating headroom to include the ceilings of many interior spaces visited by Ida and Wanda (so much so that, as noted by Catherine Wheatley, the subtitles often become surtitles so as not to interfere with the visuals). Both indoors and outdoors, Pawlikowski relishes opportunities for vivid internal framings and sharp contrasts between foreground and background objects.

An accomplished storyteller, Pawlikowski dispatches more information through Bressonian silences and long static takes than he does via lengthy exchanges of dialogue. In one enticing subplot, Ida and Wanda pick up jazz saxophonist Lis (Dawid Ogrodnik) on his way to a gig, and the young people are noticeably attracted to one another — much to the delight and amusement of Wanda. Lis later performs John Coltrane’s “Naima,” and for a few delicate scenes, Pawlikowski turns from the somber realism inspired by the Polish Film School to pay homage to the spirit of the influential films of the Czech New Wave, letting tiny rays of light shine in through the darkness.

“Ida” is now available on demand.