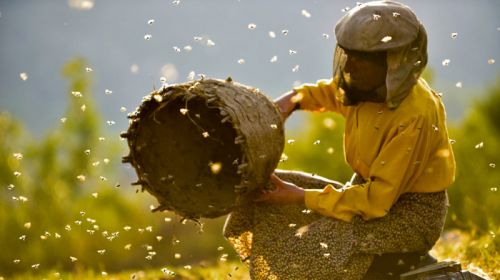 Nearly one year ago, Tamara Kotevska and Ljubomir Stefanov’s stunning documentary “Honeyland” collected a trio of awards following its world premiere at the Sundance Film Festival. Those accolades, including special jury recognition for both cinematography and “Impact for Change,” as well as a Grand Jury Prize, were the first indicators of the film’s critical potential. The recent announcement of an Oscar nomination marks the conclusion of a successful journey that features an opportunity for the moviemakers to collect a statuette as shiny and golden as the honey harvested by the luminous central subject of their film.

Co-directors Kotevska (age 26) and Stefanov (age 45) previously collaborated on the short nonfiction “Lake of Apples.” Both filmmakers are Macedonian, and “Honeyland '' is only the second movie from that southeast European republic to be recognized with an Academy Award nomination (Milcho Manchevski 1994 “Before the Rain '' is the other). Statistically, the odds for this movie to make its way to Hollywood might seem long, but the incredible craftsmanship and compelling storytelling suggest not only that the recognition is richly deserved, but that we will be seeing more from these storytellers in the future.

“Honeyland” closely observes the day-to-day work of Hatidze Muratova, a beekeeper who pursues her livelihood using long-preserved traditions dependent on close proximity to wild hives. Making ends meet is an around-the-clock endeavor. Hatidze also looks after her failing mother Nazife. The interpersonal exchanges between the two women are just one of the film’s many rich pleasures. In her mid-80s, confined to bed, mostly blind, and not particularly interested in eating anymore, Nazife is nevertheless sharp and witty, and the translations of her comebacks, wisecracks, and asides convey the essence of the woman’s wicked black sense of humor.

The filmmaking techniques and directorial choices will be immediately appreciated by cinephiles and documentary lovers. Kotevska and Stefanov, who spent three years gathering more than 400 hours of raw footage, effectively skip voiceover and formal talking head, choosing instead to construct the key narrative arcs of the movie through the many challenges faced by Hatidze. Obviously, the presence of the camera makes an impact on the material gathered, but the directors accept and acknowledge this feature, linking Hatidze directly to audience members she will never meet face-to-face. Quietude and introspection alternate with the more animated and stressful encounters between Hatidze and a family of nomadic neighbors.

Once Hussein and Ljutvie Sam, accompanied by their rambunctious and hysterically accident-prone brood of seven kids, announce plans to start an ill-advised beekeeping operation of their own, “Honeyland” locates a supreme conflict that needs no subtitling to be understood. It is difficult to swallow Hussein’s outwardly greedy encroachment and overextension. His actions, and his failure to abide by Hatidze’s wise plea to leave enough honey to keep the local bee population healthy, position him as something of a villain. But we marvel at the patience of Hatidze, who treats her rival’s children with kindness. In her mysterious way, Hatidze’s character is as gorgeous and singular as the breathtaking images collected by cinematographers Fejmi Daut and Samir Ljuma.