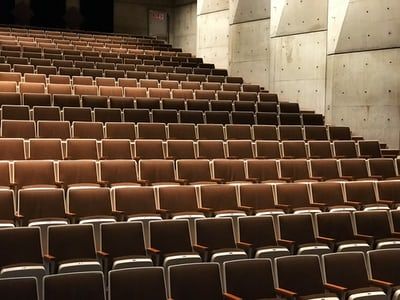 Cinematic depictions of the creative process are as common as they are usually unconvincing. Whether encapsulated in a montage or stretched out over several scenes, images of painters painting, composers composing, writers writing, and rockers rocking are regularly meant to convey to the viewer a sense of awe or accomplishment when the final product is revealed. Frustration and failure can also factor in some of the best films about the struggles of making something out of nothing. “Barton Fink” is tough to beat, and “Amadeus” communicates triumph and defeat with equal brilliance.

Musician Marc Collin’s “Le choc du futur,” one of the handful of South by Southwest-selected features recently included in the festival’s online partnership with Amazon Prime, capitalizes on a modest budget to imagine its 1978 setting amidst the rapid evolution of electronically-generated, synthesizer-based pop recordings in dance and other genres. More precisely, Collin spins a recognizable tale -- the burdens and challenges faced by women in an industry controlled by men -- to render the details of a moment in time. Collin knows his stuff. The massive wall of equipment that dwarfs the protagonist has been assembled with care and becomes a character in its own right. But one of the most appealing things about the film is that the director is no snob; you don’t have to be an aficionado to appreciate the journey.

The majority of the film’s action is confined to the gear-filled apartment Ana (Alma Jodorowsky, whose grandfather is indeed Alejandro) watches for a traveling friend. Collin eventually visits a few more locations, but “Le choc du futur,” whether by design or by budgetary limitations, tethers our protagonist to the tools of her trade. Ana’s self-quarantine is one of devotion to her craft and is unrelated to the one currently underway. Ana also receives many guests, and each one, like a new instrument added to the symphony, expands our understanding of her character and her objectives.

Collin contrasts Philippe Rebbot’s entitled producer/go-between -- whose unwelcome and creepy advances Ana must routinely deflect -- with the warmer and more avuncular personality of Geoffrey Carey’s instantly recognizable aging hipster. Carey and Jodorowsky share one of the movie’s best scenes, when he drops the needle on a stack of fresh records to gauge Ana’s reaction. She misses the boat by shrugging off Suicide’s “Frankie Teardrop,” but the interaction establishes Ana’s hunger for fresh sounds. Even more rewarding is the sequence in which a vocalist played by Clara Luciani establishes a powerful creative connection, leading to the film’s most sustained depiction of song-building.

Several critics have complained that Collin fails to fully explore the social inequities and gender imbalance that put Ana at a disadvantage compared to male artists who don’t have to deal with misogyny and sexism. But Collin’s more subtle approach rewards us with front-row seats to this highly specific world. One of the most accomplished elements of “Le choc du futur,” which is Collin’s feature debut (he is better known as covers project Nouvelle Vague’s co-founder), is the way it engages in an ongoing conversation on the nature of art and how we consume it as well as create it. Ana’s desire to add her voice as a practitioner is echoed in a closing title that pays tribute to the groundbreaking women of electronic music.