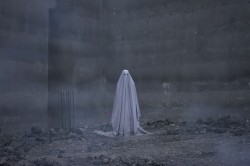 Reteaming with his “Ain’t Them Bodies Saints” leads Casey Affleck and Rooney Mara, filmmaker David Lowery has a very compelling tale to tell in “A Ghost Story.”

Somber yet funny, and comfortable with exclamations of profundity and absurdity, the movie is an invitation to reflect on a few great philosophical questions.

Beautifully conveyed in a squarish aspect ratio close to the approximate 1.37:1 dimensions of the classic “Academy” standard, Lowery’s instincts are rewarded by the stunning photography of Andrew Droz Palermo, who helps conjure a pharaoh’s tomb of pictures that meditate on place, love, loss, loneliness, and the ephemeral blink of the human lifespan.

As the couple known in the end credits only by single initials, M (Mara) and C (Affleck) inhabit a small rambler in which the shorthand of their relationship is communicated via moments of conflict, intimacy, and the recognizable patterns of daily routine.

One night, they get out of bed to investigate the inexplicable and startling sound of something landing on the keys of the piano. Not long after, C dies in a car accident just outside the house, but his ghost -- rendered as the classic white-sheet-black-eyeholes icon -- stays behind, silently observing M as she first reels in shock, then mourns, and eventually moves on.

Lowery directs with confidence, masterfully modulating our feel for the passing minutes by the skillful manipulation of cinematic time. We learn how a kind of eternal present works differently for the ghost of C, which Lowery investigates via a range of straightforward devices so often taken for granted. For example, a series of shots of M leaving the house are exquisitely stitched together to appear seamless and unbroken.

We’ve seen stuff like this before, but the context calls for our close attention. In one of the movie’s most imaginative and yes, haunting, displays of imagination, C spots a fellow ghost next door, and the two speak telepathically (helpful subtitles lighting the way for the viewer). The eventual outcome of that otherworldly acquaintance will take your breath away.

In his essay on the film, Anthony Lane shares a passage from Vladimir Nabokov’s “Pnin” speculating on the “democracy of ghosts,” but one could just as readily point to Richard McGuire’s astonishing graphic odyssey “Here,” which in its meditation on the intersection of space and time contains the thought, “Life has a flair for rhyming events.”

I don’t know whether Lowery had McGuire in mind when he went to work on “A Ghost Story,” but several of the film’s most memorable and powerful scenes, including an eerie observation of a family of murdered settlers, echo McGuire’s incredible technical feat.

Others, including Nick Johnston and Benjamin Rosenstock, have also noticed the parallels between the two works, the latter remarking, “‘A Ghost Story’ is probably the closest we’ll ever get to an adaptation of ‘Here.’”

Writing about “Here,” Chris Ware said, “You could say [the main character is] the space of the room, the arbitrary geometry imposed by a human mind on a space for reasons of shelter and as a background to this theatre of life. But you could also claim it is the reader, your consciousness where everything is pieced together and tries to find, and to understand, itself.”

While “A Ghost Story” does not quite match McGuire’s achievement, Ware’s words could readily apply to Lowery’s film, which now takes a place alongside some of the screen’s great depictions of spirits and phantasms.