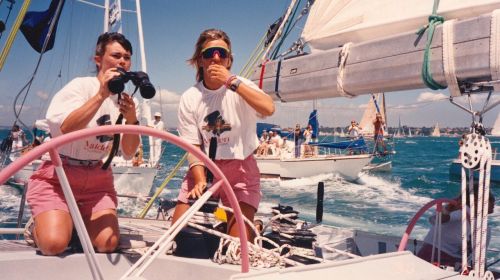 Legendary British skipper Tracy Edwards, who in 1989 led the first all-female crew of sailors to compete in the tough-as-nails, 33,000-mile Whitbread Round the World Yacht Race, makes for a convincing heroine in filmmaker Alex Holmes’ thrilling sports documentary “Maiden.” Named for the refurbished, King Hussein of Jordan-sponsored vessel Edwards piloted in the competition, the film unfolds with a strong sense of adventure and excitement -- due in part to the likely ignorance of a majority of viewers who don’t know the outcome of the contest, and also to the urgency and immediacy suggested by Katie Bryer’s skillful editing.

Yacht racing, when referenced at all in mainstream popular culture, suggests wealth, whiteness, masculinity, exclusivity, and privilege. Holmes doesn’t comprehensively dispel these characteristics, but does emphasize the rebellious, scrappy, outsider aspects of Edwards during her restless youth. The exposition, handled with economy, sets the film’s core thematic agenda: a tradition-smashing bid for respect in a space historically closed off to women. A period clip from a local news station package draws laughs and gasps. The merciless and cruel male chauvinism of observers is still present in several of the newly-shot interviews. And yet, then and now, Edwards is determined and undaunted.

Holmes cuts among straightforward talking head interviews with crew, rival sailors, journalists, and others to fill in the narrative of the odyssey, but the lower-quality, archival, shot-on-video footage, often taken by Maiden cook (and Edwards’ childhood friend) Joanna Gooding, gives the director gripping raw material illustrating the power and extremes of weather conditions throughout the race. Those seafaring images are Edwards’ equal in star power, and should drive viewers to the movie. “Maiden” additionally weaves together recollections from Edwards’ supporting cast of voyagers, providing details about all kinds of doubts, fears, and challenges. One noteworthy example is the personality conflict that led to the dismissal of first mate Marie-Claude Kieffer Heys.

During the course of the film, which charts the progress of the nine-month endeavor through its six legs, the commitment of the women to the cause and to the boat and to each other transcends the obvious messages of gender-indicated empowerment to say something even more profound. Edwards is rock-solid in this respect, delivering one naked truth bomb after another on the topics of both sailing and misogyny, with articulate, crystalline, no-bullshit perspicacity. The women on board the Maiden, nearly all of whom are on hand to look back, speak with such candor, tears will stain the cheeks of all but the hardest spectators.

Holmes, who first encountered Edwards when she spoke at his daughter’s school, suggests that the feminism of yesterday versus today can illustrate the insidious grip of entrenched, male-run institutions. Reflecting and refracting the ongoing conversations around everything from the salary inequity between male and female soccer players to the alleged child sex trafficking hellscape perpetuated by Jeffrey Epstein (the latter of which is brilliantly addressed by Rebecca Solnit in her recent Literary Hub essay “In Patriarchy No One Can Hear You Scream”), “Maiden” can be read as both time capsule and time bomb.