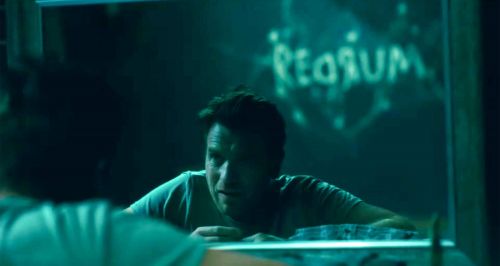 Nearly forty years after Stanley Kubrick’s classic horror film conjured thousands of nightmares, director Mike Flanagan wakes up the belated sequel “Doctor Sleep,” the strongest work of his promising career. Smartly striking a balance between the iconic status of Kubrick’s sound and vision and the Stephen King signatures that spread out to connect many people, places, and things — as seen, for example, in Andy Muschietti’s sprawling telling of “It” — Flanagan threads the needle to please more than one group of emotionally-invested followers. The filmmaker also wrote the screenplay, and despite significant changes to the story told in the novel, he honors the spirit of King’s spirits as well as Kubrick’s restless demons.

King is nothing if not handy with the clever moniker, and the title of the book and the movie refers to the macabre nickname of the now grown-up Danny Torrance (Ewan McGregor), an alcoholic with some daddy issues and serious PTSD. The adventure, however, is shared by two key protagonists. Arguably, the most important character is Abra Stone (Kyliegh Curran), a girl with the same kind of supernatural “shining” gifts as Dan. The powerful penpals form a bond through psychic communication while a dangerous gang of scream-eating, pain-drinking, vampire-like predators known as the True Knot draws ever closer. In a weird way, Flanagan might have inadvertently made the best X-Men movie to date.

The True Knot is led by seductive child-killer Rose the Hat, and she is played by the wonderful Rebecca Ferguson as a rather spectacular mashup of Kiefer Sutherland’s Lost Boy David and Mathilda May’s relentless “Lifeforce” essence-drainer — with a dash of Anne Rice and at least a hint of Lena Olin’s fellow bohemian in “The Unbearable Lightness of Being.” Like all appealing villains, Rose manages to project enough familiar longing for the viewer to be able to relate to her desire to live, even if we don’t condone her evil means. Ferguson just about walks off with the whole works.

King’s longtime disdain for Kubrick’s brilliant film is the stuff of horror movie legend, and a number of pieces have already outlined the careful manner in which Flanagan honors both entities (as well as the less essential, three-episode, 1997 ABC miniseries). Cinematically speaking, Kubrick’s genius and influence persist. Rodney Ascher’s documentary “Room 237” is a must-watch, film geek, conspiracy theory territory. In a big red valentine from Steven Spielberg, “Ready Player One” swapped out the “Blade Runner” sim of the novel for a thrilling Overlook dark ride. And just this year, the Pixar team squeezed several references into, of all things, “Toy Story 4.”

Flanagan always does his homework, and our return visit to the scariest hotel in Colorado is a wonderland of reconstruction. When Rose gazes upon those gushing elevator doors, her face lights up with awe, a smile curling her lips. Many viewers will share that look. Hallorann, Wendy, Jack, the Grady twins, and many more remind us why it’s so hard to quit roaming those halls — Danny Lloyd even makes a cameo appearance — and why Flanagan reconfigured King canon to make his version. That “Doctor Sleep” doesn’t in any way detract from or diminish the 1980 film is a genuine compliment.