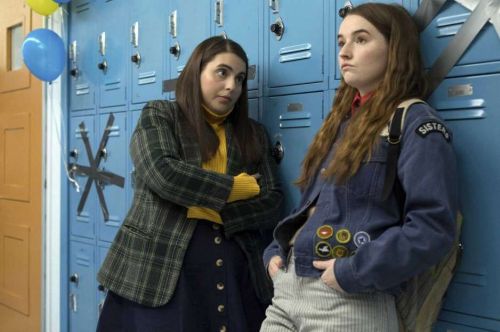 “Booksmart,” Olivia Wilde’s great feature directorial debut, is -- like several of the very best teen/teensploitation/coming-of-age comedies -- about many things. But the one that resonates most is contained in the ancient maxim regarding the deceit in appearances. Both the filmmaking, which repurposes a healthy checklist of genre chestnuts in a consistently fresh package, and the journey of best friends and graduating high school seniors Molly (Beanie Feldstein) and Amy (Kaitlyn Dever), value the real work of upending expectations, casting aside stereotypes, and demolishing one’s uninformed positions of ignorance.

All of those outcomes spring from the simple yet hilarious premise in which Yale-bound Molly’s valedictory sense of superiority is deflated when she learns, on the last day of school, that several seemingly unworthy classmates are also headed for Yale, Stanford, Georgetown, and, in one case, a six-figure salary writing code for Google. Turns out Molly and Amy might have been able to squeeze in more fun and shenanigans. Their sense of outrage at having spent more time in the library than pursuing social events and romantic relationships leads to a spontaneous decision: they will go to a party or die trying.

“Booksmart” is not without a few hiccups and missteps. And it raises several interesting and unanswered questions. How come we get to meet Amy’s supportive folks but learn nothing about Molly’s domestic situation beyond the conspicuous establishing exteriors of the apartment building where she lives? That hint at economic imbalance may be nothing of consequence, but Skyler Gisondo’s obnoxious yet tender Jared spends ridiculous amounts of cash on a party to secure the affections of his classmates -- until the script calls for an epiphany about money’s inability to secure happiness.

These minor quibbles, however, melt in the sunshine of Molly and Amy’s partnership. Wilde lavishes attention on the quirks of their closeness, familiarity, and camaraderie. The shorthand and friendspeak, illustrated by nerdy dances, frank and judgement-free discussion of embarrassing intimacies, and the endearing way in which the two perform a ritual in which escalating compliments are traded back and forth, become the heartbeat of the movie. When the inevitable moment of the temporary falling-out arrives, in the shape of a wrenching argument that might put a lump in your throat, “Booksmart” seals the deal as a break-up/make-up bullseye. The presence of the reconciliation trope is nearly a given, but it has rarely been so effectively realized.

By keeping a close directorial watch on the nuance of character, Wilde carves out the space to experiment visually (an animated interlude with Amy and Molly as Barbie-like dolls turns into a comic confrontation of the complexity of body and beauty myths). Much has already been made of the film’s status as a feminist addition to the historically male-dominated teen canon. But one of the things that defines this movie is the location of the universal in the specific.

You don’t have to be a queer teenage activist to relate to Amy, but imagine what “Booksmart” might mean to those who have not seen themselves regularly represented on the mainstream screen.