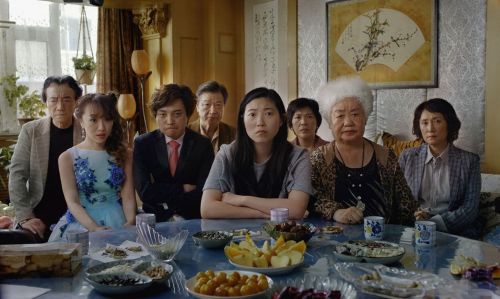 Writer-director Lulu Wang finds inventive ways to freshen up the terminal cancer tale in “The Farewell,” a worthwhile diversion to so much summer blockbuster fare. The popular subgenre, which comfortably intersects with drama, comedy, and romance, has attracted filmmakers and audiences for decades. Akira Kurosawa (“Ikiru”), Ingmar Bergman (“Cries & Whispers”), and Mike Nichols (“Wit”) all brought their considerable talents to the associated tropes of the category, and scores of others have explored the built-in emotional fireworks of life interrupted and mortality faced.

Awkwafina plays Billi, a struggling New York writer who was brought by her parents to America from China at the age of six a quarter of a century ago. Hiding her struggles to make rent from father Haiyan (Tzi Ma) and mother Jian (Diana Lin), Billi expresses alarm when told that her beloved Nai Nai (the Chinese term of endearment for a paternal grandmother) is in the late stages of advanced lung cancer and likely has just months to live. Using the comically elaborate pretext of Billi’s cousin’s wedding to gather the family in Changchun, the members of the clan have agreed to withhold the truth about Nai Nai’s condition from the matriarch.

Billi, initially incredulous that her relatives would all perpetuate a so-called “good lie,” wonders aloud whether a person should have the right to know about one’s own health matters. Billi’s “moral” position, broadly representative of the Western individualism that clashes with the collectivist system practiced by her extended relations, marks the first significant theme Wang will explore as the wedding preparations unfold in Changchun. The filmmaker, who developed “The Farewell” from a segment called “What You Don’t Know” that she produced for the 2016 “This American Life” episode “In Defense of Ignorance,” uses the subterfuge as a way to think about, among other things, dual-culture identity.

Wang’s welcome twist distinguishes “The Farewell” and sets up another of the movie’s successful visual and thematic contrasts: the morose cloud of gloom that hovers above the head of Billi versus the vivacious optimism and joie de vivre emanating from the cheerful Nai Nai. Zhao Shuzen is a marvelous onscreen presence as Billi’s grandma, and Wang stages several astute, observant, and insightful exchanges between the old woman and the young woman. Accordingly, the film deftly balances the comic and the tragic (see, or rather don’t see, Zara Hayes’ insulting “Poms” for comparison) from start to finish.

“The Farewell” opens with the script “Based on a true lie” and ends with an image of epiphanic surprise. Wang’s autobiographical connection to the material, embodied via audience identification with Billi, adds some intrigue, especially when it comes to the elements of suspense and anxiety revolving around the ever-present threat that Billi will defy the wishes of the others and share the truth with Nai Nai. Several critics have noted a kinship between Ang Lee’s early-career indie “The Wedding Banquet” and “The Farewell,” both in terms of East-West differences and in the application of deceit as a storytelling device. The comparison is reasonable, and hopefully Wang will build an equally distinguished filmography.