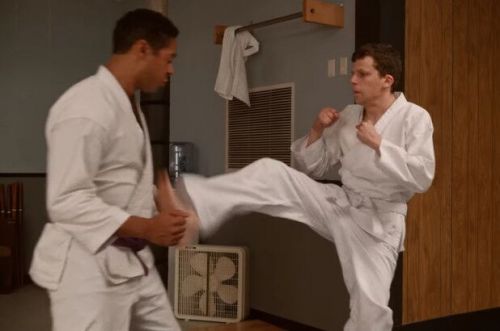 Writer-director Riley Stearns confronts the foul odor of hypermasculinity and misogyny in “The Art of Self-Defense,” a pitch-black comedy featuring Jesse Eisenberg, Alessandro Nivola, and Imogen Poots. Eisenberg’s Casey Davies is another of the actor’s signature submissives, a “35-year-old dog owner” (according to a local news report) victimized by a group of motorcycle thugs while on his way to purchase chow for his dachshund. The brutal physical assault merely adds to Casey’s daily humiliations. His every waking hour is fraught with a suffocating series of micro and macro indignities, which Stearns presents with droll self-reflexiveness.

Casey joins a karate class led by the enigmatic Sensei (Nivola), a supremely confident martial artist whose unorthodox methods on the mat are paired with increasingly alarming invective. Especially troubling is the openly hostile criticism Sensei directs toward skillful brown-belt Anna (Poots), the only female student in the dojo. Sensei’s ugly leadership in “The Art of Self-Defense” invites comparisons to the reactionary and defensive buffoonery of Donald Trump and his MAGA legion. As satirical critique, Stearns’ vision metaphorically intersects with ongoing discussions centered on the politics of white male fragility.

The film’s pronounced references to its own artificiality irritate or delight, depending on one’s tastes. Stearns expresses a level of individuality that merits attention, but his grasp of tone -- which includes an often successful blend of surrealism and banality -- lacks the consistency of Quentin Dupieux, whose “Wrong” parallels “The Art of Self-Defense” in several respects. Blunt-force radical honesty and statements of the obvious to generate uneasy laughter call to mind Yorgos Lanthimos’ “Dogtooth.” Stearns’ association with David and Nathan Zellner, who serve as two of the movie’s executive producers, builds additional goodwill and credibility. David Zellner is a welcome onscreen presence as blue-belt karate student Henry.

Like “God’s lonely man” Travis Bickle, Casey’s inclination to lash out with the aid of a firearm leads to a comic exchange with a purveyor of guns and serves as a terrifying reminder of just how easily the frustration of an Angry Man in America can escalate to mayhem and murder. The arch dialogue in the interaction between Casey and Davey Johnson’s blunt shopkeeper echoes the famous scene between De Niro’s cabbie and Steven Prince’s smooth-talking salesman in “Taxi Driver.” Paul Schrader’s dialogue, however, is subtle by comparison, as Stearns imagines a no-pressure dealer eager to describe every possible statistical horror awaiting a new pistol owner.

Karate provides Casey with a sense of purpose, a feeling of self-control, and an avenue for reinvention. But cracks in Sensei’s facade present our protagonist with increasingly thorny dilemmas. While Stearns exploits a number of ridiculous possibilities invited by the color-coded hierarchical structure of the ancient combat system -- Casey’s desire to wear a yellow belt at all times inspires one of the movie’s funniest scenes -- “The Art of Self-Defense” just as comfortably embraces horror tropes. The close proximity of sudden, shocking violence to the humor challenges viewer expectations, but with a few notable exceptions in the movie’s later sections, the filmmaker successfully pulls off his tricks.