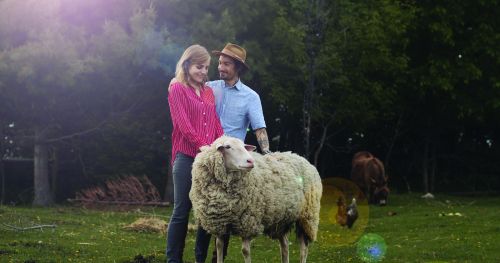 Bismarck-based filmmaker Samuel Sprynczynatyk’s “Kindred Creatures” is a feature-length documentary that explores the world of farm animals and the sanctuaries that rescue them. The movie also addresses animal rights and animal activism. For Sprynczynatyk, a long-time vegan, “Kindred Creatures” is a dream project that advocates the position that “animals are somebody, not something.”

HPR’s Greg Carlson talked to Sprynczynatyk about the new movie.

GC: You are a very young person to have survived a pair of major heart attacks that nearly ended your life.
SS: I had been working on the film for about two years when I suffered two widowmaker heart attacks in one day and almost died. I was in a coma for two weeks and medically paralyzed. The doctors weren’t sure if I would have brain function if I even survived.

I woke up from the coma and spent the next two months fighting for my life in two different hospitals with more complications than I even knew existed. I remembered the film through all of this and kept asking when I could get back to work on it. It was a reason to get up in the morning when everything else seemed hopeless.

GC: Your producer and partner Medora Frei has been a steady presence behind the scenes of your movies for a long time. What does she bring to a production?
SS: Once Medora came into my life, I quickly learned that I could completely trust her. You need a team to make longer films and she became mine. I couldn’t have done “Kindred Creatures” without her. She was there from the very first shot and was by my side with audio and lights and support and driving and editing ideas from day one. When I was having hard days, she would be there to get me through them.

Medora and I booked flights to film the biggest animal rights march taking place in San Francisco. A week before we left, I tore a ligament in my knee and couldn’t walk. We decided to go on the trip anyway. Once we got to California, Medora pushed me in a wheelchair through the streets of San Francisco as I filmed the activists marching through downtown. This is one of my favorite scenes in the film, and without her strength, determination, and love, it never would have happened.

GC: “Kindred Creatures” is your first feature-length documentary. I know you originally thought it would be another short.
SS: I was planning to create a ten-minute movie about a chicken rescue in Minneapolis. I shot it and was almost done with the edit when I accidentally dropped my hard drive and lost all of my footage. I learned a valuable lesson about backing up my work. At first I was heartbroken, but then a wise person told me that sometimes you have to let things fall apart to make room for something bigger and better.

GC: Did you grow up eating meat?
SS: I did grow up eating meat and dairy. I never questioned it because it was how I was raised. I went vegetarian a couple years before I started making this film and that is what prompted me to research these animals more.

Once I started going to these sanctuaries and making this film, I quickly learned things I had never known before. I learned happy truths like the fact that cows play and run after balls, pigs can put puzzles together, and chickens have complex social lives with the rest of their flocks.

I never considered these animals to have rich lives until I met them in an environment that allowed for their natural traits to come alive. The sanctuaries give these animals love and understanding, which is something most of them have never had before.

GC: Do farm animals take direction?
SS: Farm animals are exactly like dogs and cats. Studies show that pigs are actually smarter than dogs. When they can build up a trust in you, you really see these qualities come out. Brock the pig sits for treats just like a dog.

These animals love the sanctuary owners and follow them around and go on car rides with them. Melanie from Rooster Redemption has chickens that jump up and down for blueberries. It’s very funny to watch. All of this is in the film.

GC: North Dakota is an unlikely place to change hearts and minds about eating animals and raising them for food. How do you deal with the skeptics and the haters?
SS: North Dakota is definitely a harder place to create this type of change. But we do hope this film is able to reach more audiences around the United States and beyond.

I know these animals shouldn’t be suffering and I truly care about them because they have no voice in our society, so to me this film helps give them a voice and I’m proud of that.

“Kindred Creatures” is currently available for rent or purchase on iTunes, and a Fargo screening is planned for later this spring.