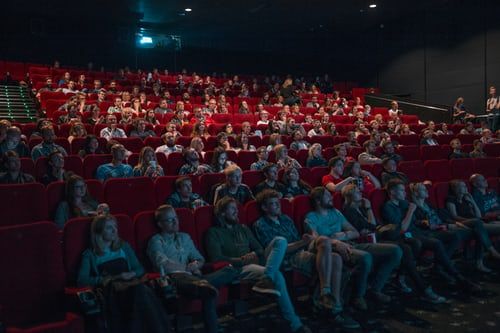 Well-deserved praise for writer-director Amy Seimetz’s efficient and provocative “She Dies Tomorrow” almost inevitably points to the film’s eerie timeliness as a metaphor for pandemic-inspired malaise and disequilibrium. More interesting, however, is the split among observers who interpret Seimetz’s intended tone in different ways. Some claim the movie is hilarious, others see it as terrifying, and another faction argues that it is tragic. Of course, it’s entirely possible for the story to encompass all those descriptions and then some, but individual reactions to the filmmaker’s carefully calibrated vision will vary. For my money, that’s a positive thing.

The movie’s central rhetorical device manifests as a kind of highly contagious, virally-spread sense or premonition of impending death. Passed from one hapless victim to the next in a manner reminiscent of the linked-chain transmission in David Robert Mitchell’s “It Follows,” “She Dies Tomorrow” trades Mitchell’s sexual panic for a more disquieting and interpersonal apocalypse. We come to understand the nature of the “disease” through Amy (Kate Lyn Sheil), an alcoholic who, certain her life is going to end the following day, calls her friend Jane (Jane Adams) to share the bad news.

Confused, concerned, and more than a bit annoyed at what she perceives is Amy experiencing a relapse, Jane does her best to offer some comfort. But Jane soon falls prey to the same strobing colored lights and pulsating sounds that signal the advent of next-day mortality. Jane attends her sister-in-law’s birthday party and infects the guests. And so on. In the film’s press notes, Seimetz writes about the film’s origin: “I was dealing with my own personal anxiety and found I was spreading my panic to other people by talking about it perhaps too excessively – while simultaneously watching a ton of news and watching mass anxiety spreading on the right and left politically.” It’s a grim coincidence that the movie’s eventual release lined up with COVID-19.

Even though Seimetz’s “ideological contagion” might have its roots in coping strategies for depression and a range of mental health issues, the director works wonders imagining how we might react if we knew we only had a few hours to live. The vignettes, which swing from poignant to bleakly comic, are among the movie’s highlights. Especially noteworthy is the droll, deadpan, and beautifully underplayed relationship between Brian (Tunde Adebimpe) and Tilly (Jennifer Kim). Their hard truths surrounding a striking, even shocking, hospital scene exemplify the gallows humor to such an extent we wish we could spend more time with the doomed duo.

The movie’s modest budget -- reportedly covered by Seimetz’s “Pet Sematary” earnings -- is an asset; domestic spaces are vividly photographed (Seimetz used her own home and yard as a key location) and situated for maximum impact. “She Dies Tomorrow” lacks the impact of “Melancholia,” but even though Seimetz’s film has been frequently compared to von Trier’s, there is a crucial distinction to be made: “She Dies Tomorrow” elects not to confirm whether the characters will, in fact, meet untimely ends. Instead, Seimetz ponders whether predictability or unpredictability would govern our choices and actions when the clock is running. Her answer? It’s personal.