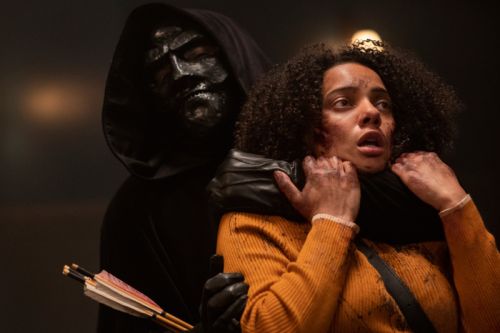 Filmmaker Sophia Takal’s reimagining of Bob Clark’s 1974 slasher classic “Black Christmas” improves on a tepid 2006 remake by Glen Morgan without finding the weird alchemy of the original. Sharing screenplay duties with April Wolfe, Takal may not have managed a definitive version, but she should be credited with constructing a genre entry interested in the feminist exploration and expression of ideas that reach beyond superficial blood and gore exploitation. Playing with of-the-moment vocabulary familiar on college campuses, the latest “Black Christmas” upends several slasher conventions, even if the film is a step down from the director’s excellent “Always Shine.”

Imogen Poots plays Riley, a sorority sister and apparent Final Girl. Preparing for winter break like her cinematic predecessors, Riley -- still reeling from a sexual assault committed by an unpunished and unapologetic student who stands defiantly before her -- reluctantly participates in a holiday-themed “Up in the Frat House” sketch that parodies “Up on the Housetop” with verses calling out a variety of coercive, unethical, and criminal behaviors stereotypical of booze-soaked brotherhoods. That eye-opening musical number succinctly encapsulates the filmmakers’ thematic agenda.

Prank phone calls are updated to app-based direct messages, and “Black Christmas” initially teases the possibility that the quiet Landon (Caleb Eberhardt), who takes a liking to Riley, may not be as kind and sensitive as he first appears. Throughout the film, Takal takes aim at misogyny in its multiple guises. Whether aggressive and out in the open or hidden behind a mask, the insidiousness of rape culture is investigated through “good girls,” “nice guys,” not-all-men arguments, and a Hawthorne College literature curriculum that name-checks Camille Paglia but excludes anything not written by a white male.

As Professor Gelson, Cary Elwes is the academic who openly cultivates a sexist teaching agenda, and his performance stands in for a wide variety of false victimhood narratives. Unable to accept even the slightest whiff of equality and egalitarianism, Gelson’s overreactions -- even as they occur within a system designed to favor the men credibly accused of committing rapes -- will remind viewers of any number of high-profile office holders perpetually outraged when confronted with facts, logic, and the truth.

Not all of the mechanics of the storytelling work, and Takal and Wolfe aren’t quite sure how to resolve some clunky elements that veer out of realism and into sorcery and the supernatural. But “Black Christmas,” despite the earnestness of its admonishment of entitled patriarchy (Takal, rather brilliantly, has claimed that she drew on Brett Kavanaugh’s confirmation hearings), never takes itself too seriously. Like many genre exercises, the characters function with a level of self-awareness that flirts with metanarrative.

Smartly, Takal doesn’t always do away with the most obviously “expendable” characters, particularly the women who would traditionally be victimized by the relentless killer, and “Black Christmas” refreshingly subverts Old Dark House math to reinforce the punch of the trailer’s highlight line: “You messed with the wrong sisters.” It is on this count that the director makes her boldest and shrewdest move by sending her young women into literal battle against the privileged bros being groomed to perpetuate white male power as future brokers in education, business, law, and politics.