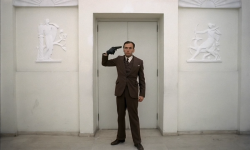 Italian director Bernardo Bertolucci has been making movies professionally for half a century, from 1962 through 2012. Arguably his best film, the groundbreaking “The Conformist” (1970) came out on DVD eight years ago and the Blu-ray upgrade released last week by Raro Video has been long overdue.

“The Conformist” is one of the most beautifully photographed movies ever made. Every shot is a work of art, with the style of lighting and composition changing as the film goes on, switching from stationary to gracefully moving camera shots, all reflecting the changes in the characters and the story. This is the film that made the international reputations of both Bertolucci and cinematographer Vittorio Storaro, both of whom were about 30 at the time. Many consider it the best work of both, although they later went on to win the most fame with their 1988 Academy Awards sweep for “The Last Emperor” (1987). Bertolucci did get an Oscar nomination for his screenplay to “The Conformist” however (based on the 1951 novel by Alberto Moravia), and another directing nomination for “Last Tango in Paris.” Storaro later earned Oscars for shooting “Apocalypse Now” and “Reds.”

Although “The Conformist” is a visual treat to watch from beginning to end, as a film it might be considered more “interesting” than entertaining. Its metaphoric psychological, sexual, political, religious and historical implications gain more upon reflection and repeat viewings (and especially after going through the enclosed booklet and viewing the bonus documentary). The story follows a man in 1930s Italy who wants nothing more than to fit in with the rest of society. He feels he is somehow different from everyone else, and he is uncomfortable that he may not seem “normal” to others.

Through some innovative flashbacks (graciously attributed by Bertolucci to his editor Franco Arcalli) we gradually discover the reason is connected to a traumatic childhood experience. To compensate, he has joined the popular Fascist party, and even though politically ambivalent he goes to the extreme of joining the Italian secret police to hunt down anti-fascist nonconformists. As the film begins, he is assigned to “neutralize” his once-admired former college philosophy professor, now an expatriate political activist living in Paris and married to the free-thinking girl he himself had reluctantly rejected in favor of a safely conformist bourgeois marriage.

The film recreates the art-deco era of Fascist Italy through the fall of Mussolini, yet Bertolucci was born in 1941 so did not know the period from first-hand experience. He instead filters much of the angst of the 1968-70 political turmoil through the styles of classic 1930s-40s cinema he so much admired, making his story as much a metaphor for contemporary life as a critical examination of the past. As such, now even further removed from the time it depicts, the plot and characters can easily apply to early 21st-century issues.

Jean-Louis Trintignant heads a strong cast as the troubled anti-hero who tries to sleepwalk through life, unmoved by his own decisions until a fateful discovery prompts a realization that makes everything sink in. The striking and sexy Dominique Sanda has some of the most memorable scenes in the film, including a scandalous and symbolic tango with Stefania Sandrelli. The restored four-minute “dance of the blind” sequence almost serves as a miniature allegorical summary of the entire film. (Deleted before the original release, this section has no English-dubbed dialogue, so plays in Italian with subtitles if the English track is selected.)

Raro Video’s HD video transfer from the 35mm negative (at 1.66:1) may look slightly soft, but this seems to be inherent to the original film stocks, as there is a very cinematic appearance of film grain throughout. Colors are rich, beautifully reproducing Storaro’s stylized, mood-evoking palette. The lossless PCM audio serves well both the dialogue and the wonderful score by Georges Delerue. The disc includes the original Italian soundtrack as well as an English-dubbed option and optional English subtitles. The Italian track is preferred but either audio track works well, as actors spoke in different languages and were dubbed into either Italian or English. Translation differences between the dubbing and subtitles are sometimes interesting to note.

Bonus features are sparse but worthwhile. Unfortunately there is no audio commentary, but there’s a 28-page booklet packed with information, interviews and analytical essays with a variety of interpretations, revealing various allusions and in-jokes. On the disc is a recent (2011) hour-long documentary called “In the Shade of the Conformist,” featuring sometimes dry analysis of the film and an extensive interview with Bertolucci (in standard-definition), as well as the original 1970 and 2014 U.S. trailers in HD (though the 1970 trailer has severely faded).