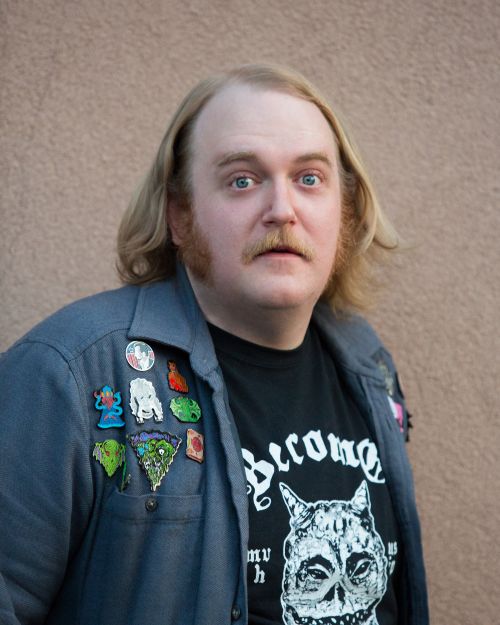 Adam Quesnell's last show at The Cellar beneath the Front Street Taproom in Fargo was in early September of 2018. He was embarking on a seminal move from Minneapolis to LA. As always, his comedy was razor sharp, perfectly timed, both nuanced and broad. Local comedy fans can check him out, along with Trevor Anderson and Drew Hehir, on February 28 and 29th.

High Plains Reader spoke to Adam about moving to LA, and his return North.

HIGH PLAINS READER: You are performing at the end of this month at The Cellar. What are you looking forward to about coming back to Fargo?
Adam Quesnell: Taco John’s and Viet Palace and seeing my friends. Beyond that, it is going to be nice to do a new-ish hour after a year and a half of short sets in LA.

HPR: What surprised you most about living in LA? Is there anything you are still adjusting to?
AQ: I guess the most surprising thing is the stark income inequality. You will see a community of homeless people living under an overpass and then two blocks later there is a palatial estate with gate access. The thing I’m still adjusting to most would be working harder for less stage time since it is such a huge spread comedy community filled with people with TV credits and such. I’ve really had to change gears to focus on my screenwriting to try to get a job doing that while still writing new standup and performing as much as I can.

HPR:You have an interest in television and media writing, and you have authored scripts. How is writing stand up material different, or similar to that?
AQ: The easy answer is that scripts are just a different medium for communicating an idea to an audience with whom you are trying to connect. What I choose to express is the big difference between the two for me. In my screenwriting I’m telling stories about characters who are very much not me. They may believe a lot of the things I do, but they are very different than who I am. In standup I am trying to communicate about myself specifically and my experience of the nightmare world in which we live.

HPR: You have performed at conventions, clubs, and festivals. How do different venues compare? Are larger venues more challenging, or does it depend on the audience?
AQ: Every type of venue had its own challenges and benefits, but generally, the bigger the crowd the more energy you have and the more fun the show can be. I love performing in alternative venues like comic book stores, museums, book stores, etc... The best way for me to get an audience that might enjoy what I have to say is to perform at the kind of place I love hanging out. Ultimately, I think that a packed, dimly lit, 75-250 seat venue with a low ceiling is really the perfect environment for live comedy.

HPR: Can you give us a teaser, or a little background on new material you may be performing at The Cellar this time around?
AQ: I probably have a half hour of new material that I have written since moving to LA, much of which is about the transition West, and I have been retooling some classic bits and chunks as well. I will certainly be bringing a very different act than what anyone in the North has seen from me in the past.

HPR: Is there anything else you would like to promote or let people know?
AQ: I’m very excited to come back, and I really miss performing in the Cellar and in Fargo/Moorhead in general. The folks at Comedy in the Cellar know what they are doing in terms of running great comedy shows and I plan on bringing the energy to match how much they put into these shows.

IF YOU GO:
Adam Quesnell/Trevor Anderson/Drew Hehir
The Cellar
February 28-29
Doors Open at 6:30PM
Show at 7PM
Pre-Sale Tickets: $15
At the Door: $20 (available unless sold out)
https://www.eventbrite.com/e/comedy-in-the-cellar-adam-quesnell-tickets-93577421587