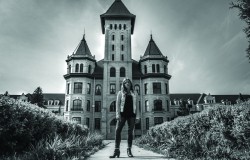 Those who have passed through Fergus Falls, Minnesota may have had the chance to drive by the old Regional Treatment Center. The hospital has been closed since 2005, but there are ongoing efforts to preserve the historic Kirkbride building that serves as the property’s main attraction.

Even with a permanent solution for its restoration seemingly far off, the space still finds occasional use. It has been discovered, for instance, that the former nurse’s cottage works splendidly as a recording space.

This Saturday, theatre artist and songwriter Ashley Hanson will be debuting her first solo album, “The Kirkbride Sessions” at The Spot in Fergus Falls. The album was recorded at the Regional Treatment Center during Hanson’s stay through the Hinge Artist Residency. The show is free to the public and open to all ages.

Before embarking on her first solo venture, Hanson played in bluegrass and folk bands and has worked in theatre art. Much of her experience researching small towns for her musicals has played a part in creating “The Kirkbride Sessions.” As with the theatre, Hanson’s goal in recording the album was to tell stories.

“A lot of times we hear so many stories, we can meet so many people, and we get to see different kinds of people and the challenges happening in rural Minnesota--rural communities across America--and a lot of that sticks with you. Even if it doesn’t make it into the particular play that you’re working on, the stories stay with you.”

“The Kirkbride Sessions” explores some of the darker aspects of rural life, those truths that we might prefer stay hidden but ultimately must acknowledge. The Kirkbride campus acted as a perfect environment to inspire songs drawing on the theme of the “rural underbelly.”

“Not that we have to be ashamed of it,” said Hanson, “but I think that we as a society need to look at these parts of our communities and start to look at ways that we can better heal and better help and bridge the gap between the haves and the have-nots, the folks of privilege and the folks that are not in a place of privilege.”

Much of Hanson’s inspiration comes from her own experience growing up in a small town. The people she’s met, both in the past and in recent years, have come together to create a cast of characters that now appear in her songwriting.

“I grew up in rural poverty, so there was a lot of alcoholism, a lot of depression, and a lot of challenges. When I think about my childhood and that quintessential down-on-his-luck person, I think about my grandfather. He really loved old country music. He was the small town alcoholic dude hanging out at the bar every single night, and everybody knows him, you know? I wanted to bring in some elements of that character.

“Being a theatre artist, I think each of the songs speaks a slightly different tone depending on the character. They’re all different characters in my mind.”

The Kirkbride didn’t just inspire Hanson’s songwriting. It also acted as a unique physical space for recording each song. Together with recording engineer Brian Laidlaw and drummer Shane Ellis, Hanson was able to experiment with musical texture within the old nurse’s cottage.

“It was a really phenomenal space,” said Hanson. “We would move around the recording gear to get different sounds and different reverb. We would put amps in hallways. The building itself really became an instrument in the process.”

The song “Lay Me Down” was recorded at the Regional Treatment Center’s mass graveyard to add another unique layer to the music, and to honor those who had passed at the Kirkbride.

“On the final night, the sun was setting, we got everything out and used just the batteries from our computers to power the microphones. It was a really moving experience to capture the vocals in that outdoor space. If you listen closely you can even hear some of the little night birds in the background. It was all part of a story.”

“The Kirkbride Sessions” adds another chapter to the Regional Treatment Center’s tale. Join Ashley Hanson this weekend in an ongoing story that’s sure to stick.