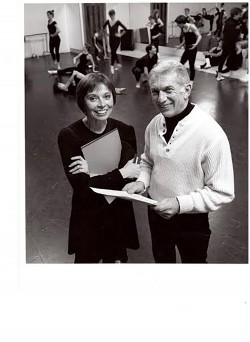 The life and work of choreographer, director and dancer Eddie Gasper (1929-2015) will be honored on Saturday, Nov. 7, at a reception followed by a tribute dance performance at NDSU’s Festival Concert Hall.

The evening will begin with a cocktail reception from 5-7 p.m. The reception will feature food, wine and Bacardi cokes (Eddie’s signature drink), along with special talks by Jack Lee, Eddie’s accompanist during his Broadway career; Chrissy Fournier, veteran dancer and choreographer on Broadway and Minneapolis-St. Paul; and Matthew Gasper, owner and teacher at Gasper School of Dance, and artistic director of the FM Ballet.

The event will serve as the kick-off of the Eddie Gasper Legacy Fund, which according to his son, Matthew Gasper, was created because his father believed that “young artists should be able to afford lessons in dance, music and other artistic endeavors.” Tickets to the cocktail reception are $50 per person and may be purchased at http://fmballet.org/rsvp.

Immediately following the reception is a one-night only performance of “Legacy: The Eddie Gasper Dance Tribute.” The show features original choreography by Eddie Gasper, restaged by Matthew Gasper and alumni dancer Patrick Kasper. It will include some local favorites, including “Be a Santa” and “Toy Shop Fantasy.”

Matthew is very excited to be sharing his father’s work “with the next generation of dancers,” most of whom never got to work with Eddie. Matthew asserts that the performance will have something for everyone. Most of the dances are jazz and tap and are “iconic pieces of Eddie’s repertoire” and very much “musical theatre.”

Eddie Gasper and his wife (and dance partner), Kathy, who will be traveling from Bradenton, Fla., to attend the event, made great contributions to the performing arts in our region. After many years dancing and choreographing in New York and Hollywood, they relocated to Fargo-Moorhead in 1978 when Eddie was hired as director/choreographer at Minnesota State University Moorhead.

The Gaspers founded the F-M Center of Dance, and Red River Dance and Performing Company. They also choreographed/directed the main stage musical at Trollwood Performing Arts School from the years 1981-1991. Their son, Matthew, is currently continuing their legacy at Gasper’s School of Dance and the FM Ballet.

For a major portion of his career, Eddie was the assistant to Bob Fosse, distinguished choreographer and stage/film director, working with him on and off-Broadway and in Hollywood.

On Broadway, he choreographed “Fig Leaves are Falling” with Barry Nelson and Dorothy Loudon, and appeared as lead dancer in “Can Can,” “Sweet Charity,” “West Side Story,” “Irma la Douce,” “The Music Man” and “Guys and Dolls.”

Twelve years ago, in the midst of a dancing career in Cleveland, Los Angeles and New York, Matthew was asked by his parents to relocate to Fargo and help at the school. What was intended to be a short-term commitment turned into a significant portion of Matthew’s career: “I have a tradition to carry on.” He loves teaching dance and is “proud of carrying on my parents’ legacy” at the Gasper School of Dance and the FM Ballet.

Matthew has many fond memories of his parents dancing. He remembers the last time that Eddie was on stage, at age 79, which was also the last time his parents danced in public together. The number was “Dickens’ Dance,” and he was transfixed by “the magic between the two of them on stage.” Matthew says, “They were both masters of the stage and you could not take your eyes off of them. You could see the joy on their faces. It was really wonderful when they danced together.”