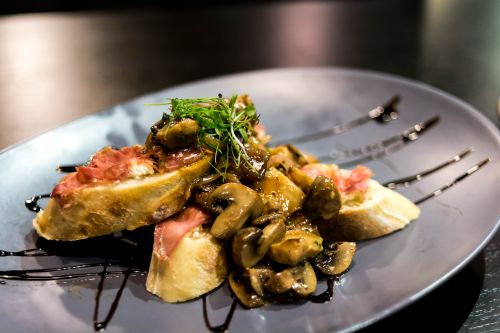 It was Tuesday night, not an average night for a date, but with busy schedules you eat when time allows. I had been eyeing 46 North since in utero, the concept of pints and provisions is more easily stated by bar and grill, but they were bold, and I appreciated their alliteration. For this restaurant is far from just a bar and grill.

The interior is dark and elegant with both elements of wood and painted steel. It gives the feel of industry paired with grace. A partially open kitchen concept mirrors others but also has a style of its own that fits the aesthetic. I chose to sit in a booth close to the window, the view of the exterior was enjoyable and welcome, as I hate being trapped in the back corner of a restaurant. Part of the dining experience is exactly that, the experience.

I asked my girlfriend to join me this evening as we hadn’t been out in a while, and her palette and enjoyment for food is only matched by my own, and this makes her a very valuable, and desirable companion on adventures such as these. Her ability to judge flavor and speak intelligently on preparation and presentation is extraordinary and it’s one of the reasons she’s my constant companion. Bringing her along also allows for the ordering of more entrees, which allows for both more conversation, but also more sampling. 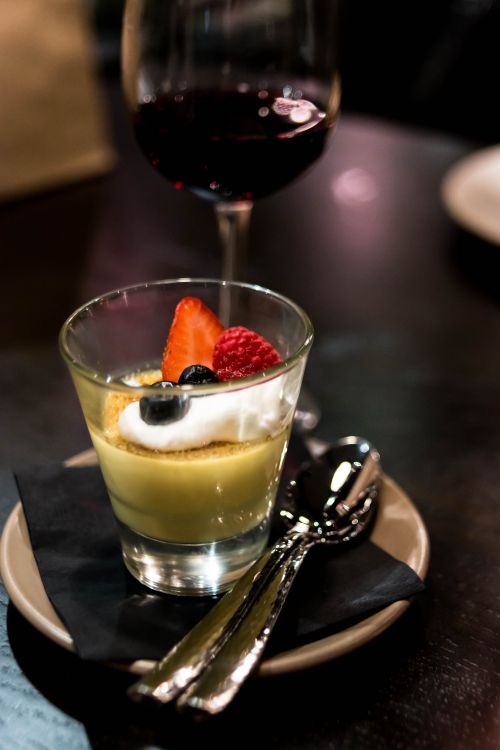 This evening we decided to start with a salad. I am a proponent of beets, I love them. I eat them roasted, pickled, and pureed. I have even been known to love a beet kvass. This salad was entitled the Beets and Blue. It was a combination of mixed greens comprised of arugula and pea shoots. It also included pecans, berries and of course blue cheese. The beets come in the form of both puree and in large chunks of both golden and red. This was all topped with a light vinaigrette. The dressing was excellent, it was light enough that it just gently accentuated the flavor of the mixed greens. There was that vinegar bite that perfectly paired with the bitterness. The berries sweetness was brought out by the opposing sour from the vinegar and gave a beautiful fresh flavor. The beets earthiness paired with the blue cheese completed the package and made for a delicious experience.

Our second course was the Mushrooms, Goat Cheese and Ham. The presentation on this appetizer was beautiful. The crostini was placed with the prosciutto over the goat cheese and then smothered in mushrooms that had been cooked in a beautiful balsamic reduction. It was then drizzled with balsamic and garnished with mixed greens. It was sweet and savory, and the mushrooms and prosciutto provided the umami that tied the flavors together. The balsamic drizzle was the perfect complement to the goat cheese, and I had to struggle to not eat all of it.

Blake, the chef and owner, then popped up and asked to cook for us. We obliged, and he promptly brought out a plate of his famous fried pickles. He explained that he had worked on the batter for a long time, and he honestly hit the nail on the head. The batter was thin and delicious. The pickles were wrapped in prosciutto and stuffed with gouda. These pickles could give The Toasted Frog a run for their money.

The first dish that he cooked for us was the Sirloin and Blue which is a sirloin steak topped with blue cheese, tomato jam, chives, chive oil and shoestring onions. Served with mashed potatoes. The steak was tender and delicious. I especially enjoyed the pairing of the tomato jam and the blue cheese. I thought the shoestring onions could have been omitted though as I tore half of them off. It looks good as a garnish, and provides that steak house look, but I believe it cheapened the impact of the dish, almost as if the dish was wearing a tuxedo t-shirt. The dish could be complete without and would be a bit classier looking. This was one of the best steaks I have eaten in the FM area. It didn’t need anything to “dress” it up. 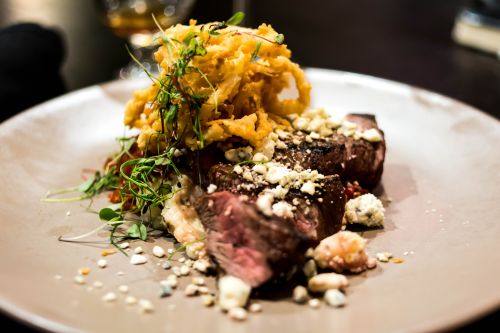 The second dish he presented was the Bison Meatloaf. I was originally apprehensive to order this on my own as I have had similar dishes at other establishments and I wasn’t totally impressed. Usually it doesn’t push the package much -- as if the bison is enough to make the dish stand on its own -- but the not-committal attitude didn’t carry through though on Blake’s dish. It was delicious. The meatloaf was partially split down the middle and stuffed with mushrooms and wrapped in bacon. It was drenched in a delicious bourbon sauce and placed on top of mashed potatoes and then topped with those onions again. The thing that impressed us the most about this dish was the flavor of the bison. You could tell it was bison, and the gaminess wasn’t hidden, it was embraced by the mushrooms, and accentuated properly with the bacon. It was a tad dry, but the sauce assisted with this, and we demolished it quite quickly.

For dessert we have the tradition of always ordering the crème brulee. We chose to stick to tradition and tried 46 North's own flavor. It was as to be expected, the presentation was a bit different though, as it was served in a short glass compared to the usual shallow crème brulee dish that is all too familiar. I appreciated this change. It was very tasty and well done. I could have had a bit more crunch in the toasted sugar coating, it wasn’t as thick as previously anticipated, and it was lacking that shattering effect that is traditionally produced when applying a quick snap of the spoon. The berries and whipped cream atop the dessert added another dimension that complemented the flavors exceptionally. All in all, satisfying.

46 North is a welcome addition to the downtown. I’m glad to have a chef who is presenting good quality food to the downtown district. With the conversion of previous establishments outside of downtown into more fast food chains it sometimes feels like we’re losing the battle. I implore all of you to take a look at the quality of your food that you are consuming. It is worth the money to eat well. To experience other flavors than just salt, sugar and fat. I understand that these are some of the most addictive substances on the planet but demand better. As the novelist Barry Hannah once said, “When you eat well, you are eating memory.” Give yourself something to remember.