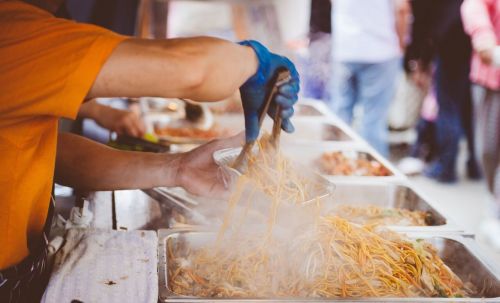 Have you all been to Taco Brothers Taco Truck yet? Or how about Poke Bowl Food Truck? Have you tried the Walleye Wrap at Chef Mobile? There may have been a few mobile food establishments in decades past, but the last few years have seen a meteoric rise of the food truck in Fargo and the nation. If you haven’t explored your options for food truck fare, I think now is the time to do so. Today, I am going to give you a few important reasons why it is great to give these food trucks a visit and a few places to dip your feet into the food truck world.

The Food and Value
First and foremost, we have to talk about the food. These food truck entrepreneurs are laying down some ridiculous food for the price. At almost any food truck in town, you can spend around $10 and leave filled up. And there is something for everybody. Some food trucks regularly move, while others have semi-established locations. I recently ate at the Taco Brothers food truck and spent 30 minutes standing at their makeshift tables, eating some great tacos, and sipping on a Mexican soda. It was glorious.

Tacos seem to be common food truck fare, but BBQ also fits the bill. It doesn’t seem that long ago that we had only one franchise BBQ joint in town. I was longing for a day when there were multiple great places that served all of the barbecue I wanted. Before you know it, a few other sit down places opened up. Food trucks happen to be built quite well for BBQ operations and now there are several BBQ food trucks. I love it. Ribs and pulled pork is no joke in my world, but my world has expanded 10-fold in the five years!

Supporting Scrappy Entrepreneurs
One thing I really think is great about food trucks is that it opens a door to entrepreneurship that brick and mortar restaurants may not afford everybody. The costs for opening a sit-down restaurant can range from a few hundred thousand dollars into the millions, depending on the land, franchise, and many other costs. A food truck, however, can be started for a fraction of the price.

I am not saying that food trucks are inexpensive, but when compared to their Brick and Mortar cousins, they are. The men and women that start food trucks have to be committed enough to invest a large sum of money, but not nearly as much as a brick and mortar restaurant.

I am not saying that one is better than the other or that either deserves your dollar more, but I am telling you that the $7.50 dollar taco plate at the food truck is going to make a big difference to that food truck proprietor compared to the $7.50 that is spent at a big box chain. The costs to start a food truck are lower. The revenue generally lower. Most of that money is going to find it’s way back into our community by these local proprietors.

Locations
There are always some food trucks downtown, but there are also food trucks that visit locations around the city. You can, oftentimes, check social media to keep up to date where your favorite food truck is located. Some food trucks regularly move, while others have semi-established locations. I recently ate at the Taco Brothers food truck and spent 30 minutes standing at their makeshift tables, eating some great tacos, and sipping on a Mexican soda. It was glorious

Additionally, I suspect that enough demand might lure a food truck to come to your workplace for lunch or dinner. Fortunately, there are a few locations that will find many food trucks in one spot. The Fargo Street fair is quickly approaching and the Food Truck Festival coming up in August 18-20 at the North Dakota Horse Park. There may be some other great events coming up this summer where you can try some great food truck food.

I am not asking for you to stop going to a sit-down restaurant. Still do that, please. For your dining out dollars, however, give your local food truck entrepreneur a chance to wow you with their food.