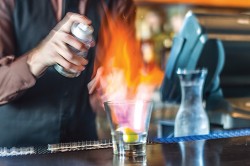 When you cross the Main Street Bridge from Fargo into the sort of culinary wasteland known as Moorhead you will notice a change, a change for the better. Eric and Sarah Watson of Mezzaluna and Mosaic Foods have expanded their culinary empire into the space once occupied by John Alexander’s, breathing new life into a cool architectural remnant of old Moorhead while raising the culinary bar for Moorhead with their new venture, Rustica.

I like how the Watsons are going about opening their new venture. When finished, it will have two major features. On the east end of the building is Rustica, for more formal dining, and the west end of the building will be a more casual bar serving wood-fire pizza and other food selections.

I like that they’ve invested time into a soft opening. Granted, they were still charging the guests, but it is a controlled environment giving the staff a chance to get acquainted with their new surroundings. This will pay off in the long run for the consumer as the service and food should be pretty much spot on when they officially open the doors this week. And I will say both were right on the mark this past Friday when the brunette and I dropped in for dinner.

Kristy Zitzow, executive director of operations for Eric and Sarah, has done a bang up job coordinating the opening and gave us a warm greeting on our arrival. Those who visited the space’s previous restaurant should be aware that patrons can either enter from the back of the building or use the middle entrance on the street side, not the old entrance to the previous restaurant.

Successful ventures (like Mosaic Catering and Mezzaluna) cultivate a loyal staff following. An aware, adventurous and confident entrepreneur will create opportunities for those people or possibly lose them, hence the birth of Rustica. Well, it might not be the only reason, but it did allow alumni Dan Dulany and Mason Nicklaus to move up the ladder from their positions at Mezzaluna to be Rustica’s head chef and manager, respectively. There is a touch of irony to this story as they both got started in the restaurant business at John Alexander’s. 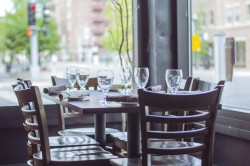 I like the very austere but comfortable physical changes. It strikes me as a room that will evolve and develop a personality of its own in time. A bar dominates the back corner of the room and provides a lively buzz of activity. The dining room, with its simple bare wooden tables and chairs, has a clean, uncluttered look. A banquette lines one wall with a towering gray wall behind it, seemingly drab but also a potential backdrop for some local art.

Rustica’s food is modern American with a nod to Spain and other countries hugging the Mediterranean shoreline. A variety of starters are there to tease the palate and we were tempted to order several and skip the entrée portion of the menu, but there were some enticing entrée to make the decision even harder.

I was going back and forth between the pork belly appetizer and the sea scallops. It was shaping into an epic battle but the in the end the scallops won. I have to say, if Eric wasn’t at the helm I might not have had the faith in ordering scallops in land-locked North Dakota. And I wasn’t disappointed. The fabulous, large, juicy-dry packed scallops were perfectly seared on the outside, tender and moist on the inside. Paired with a cauliflower puree and a yellow raisin cream sauce it all seemed very white and soft textured but it worked and worked well. The brunette went with a Shrimp Romesco with Polenta Croquette, the tomato almond based sauce was flavorful and the shrimp were done right and the croquette was nicely crisp on the outside.

There is a nice selection of entrees and the decision was easy for me as lamb is high on my list of favorites. The brunette wanted something on the lighter side and selected the one vegetarian option, a portabella mushroom and fresh vegetables wrapped in pastry. It was well presented with a lovely crisp pastry shell encasing flavorful vegetables but the portabella was a bit lost and not the star ingredient. My lamb was really well presented, tender and mildly flavored, a really superb dish. I won’t say more, just go and try it.

For dessert, I just had to go for the Tres Leches, which is offered with very high-quality maraschino cherries, not your regular grocery store variety. As they were caramelizing fresh peaches for another dessert, I asked Lauren, our server, if I could have them with my Tres Leches and without any hesitation they honored my request and it was delicious. The Tres Leches came as a layer cake, which is not the norm. I was suspected that it wouldn’t be well soaked in the three milks it is named for. But the chef proved me wrong and it was perhaps one of the best renditions I have had and I have had many. It turned out to be a great ending to a wonderful meal and dining experience.

Tuesdays through Saturdays, 4 to 10 pm