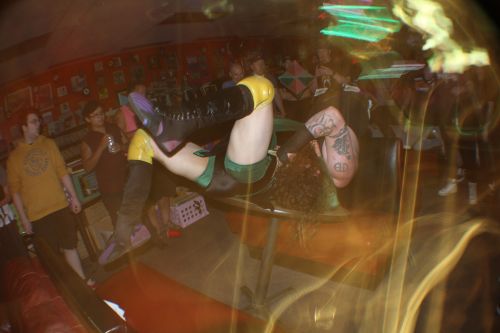 The High Plains Reader spoke to Ojata Records and the Dogmajal owner and operator Jeremy Swisher about the ever-growing Grand Forks record store and hotdog shop.

HPR: We might as well get the elephant out of the room. What went into choosing the names for "Ojata Records" and the "DogMahal"?

Jeremy Swisher: Ha. Ojata, which is commonly pronounced “Ohota.” The word is a misspelling of a Native word meaning "to cross water."

Our first location was downtown Grand Forks, catercorner from town square. We were there from 2010 to '14.

I imagine early in its conception, it had been some cool attempt to be artsy or something, but it just had a ring to it that seemed just different enough to be original... yet fitting, in that, the space was a block from the Sorlie bridge in historic Grand Forks.

Learning that Ojata was a ghost town 9 miles west of here was interesting, it was the first train stop heading west from Grand Forks. Legend has it that Ojata was quite the party destination. It's said that one could hop the train for a nickel or dime and head to Ojata for nightlife and entertainment.

Ojata wasn't much more than a few saloons and hotels, a post office & the train station. The last of the buildings there had burnt down in the 50s, and it was erased from the county map.

I guess I envisioned that the shop would be, not only a place for cool stuff like vintage vinyl, books, comics, music, movie media, and gear... but a small live performance venue for in store shows and other parties/meetings.

So I decided to resurrect the name to see if there were still good times to be associated with it, a historic reboot for the region, or just a fun story to tell.

HPR: Earlier this month you celebrated your 9th annual "DogmaFest." Tell me about that. What were some highlights?

JS: Yes, so each year we've made an effort to help with the influx of touring bands who've made way to Minot, ND for Why Not Fest. Most years we've had up to 20 acts over two days. Highlights this year were a "no ring no rules" pro-wrestling match. Our friends from Tucson, Az, Snailmate, made it up without knowing it was a fest.

HPR:You are known for hosting and supporting local, regional and even international musical acts. Can you tell us a little bit of your process in regards to discovering, contacting and booking these bands?

JS: Most of it is dumb luck, we owe much of our success to runoff from Fargo promoters who can't help with a date and send bands our way. Other times, bands find us online and message for shows. There have been a few times I find a band who has a gap in tour dates in our area, and I reach out. I guess some of it is due to there being shows on the regular. Folks see there's a venue in Grand Forks that has had some cool stuff happening and wanna check it out.

HPR: Let's move our focus to the DogMahal. For those (like myself) who haven't yet checked out the store, can you describe the layout? I know the Dogmahal is inside the record store. I love the idea that people can browse while waiting for their food order.

JS: Well, the entrances open alongside the kitchen area, where all the goodies are made to order. Folks order and checkout at the counter. Adjacent to said counter is a large table and the start to a string of booths ending with a love seat couch. Along the left side are numerous racks of vintage comics, along the right is vintage stereo gear and crates for vintage vinyl to dig through. In front of the couch are 8 mobile racks of even more vintage vinyl. Then a makeshift stage with loudspeakers on both sides. Clusters of band gear and drums are littering the outlining area of the stage.

HPR: The menu has an impressive variety!

How did you come up with fun names like "Fireballs of Freedom" and the "Papa Legba"?

I assume the latter is New Orleans-inspired.

JS: Fireballs of Freedom is one of my favorite garage rock bands from the 90s, it just made sense to me to name a spicy meatball sandwich/hot dog after them.

Papa Legba is another spicy hot dog w/ pulled pork and fusion slaw. I think I was inspired by the film True Stories by David Burne and the Talking Heads. The segment where John Goodman was seeking help for anxiety over stage fright and finding a new romance. A pretty sweet song sung by a hoodoo priest in this film mentions Papa Legba.

HPR: On the Dogmahal Doghaus facebook page, you have been given a 4.8 out of 5. One customer wrote that they "couldn't wait to be hungry again."

What does such praise mean to you? What do you think makes your food special? I read that you often use local ingredients/suppliers.

JS: We try not to take ourselves too seriously, and that's what our friends and customers see throughout the shop. Praise is all fine and stuff, but it's the folks that get us and come back for more, that means the most. This is what keeps us fresh. That, and that we don't have much for cold storage. Depending on the workload, I try and make daily trips to local sources for fresh produce, meats and cheese. I'm not gonna lie, much comes from our friendly neighborhood Hugo's, but some ingredients I seek out at our international markets and other specialty shops.

HPR: On the Ojata Records facebook page "About" section, under the headline "Our Story," one paragraph stood out to me: "We maintain a low profile non-commercial/corporate presence here in Grand Forks ND. We are an independant DIY venture, a non-discriminating safe place for our community, with emphasis on arts & culture." How important is it to you that the business be independent, non-commercial, and a safe place for the community?

JS: I feel the DIY ethic stems from when I was actively playing in bands and promoting shows in my 20s. We never sought out help with promotion from anyone other than the guy who would make copies of our flyers at Kinkos. Other than that we would do the leg work, grassroots style. It's largely the same now, only different. Social Media is the new target, same ol' flyers, new kind of people to reach. Typically we don't have the cash to spend on commercial advertising and if we did, we still wouldn't work with companies like I Heart Radio or Midco, so we've been self reliant on advertising via social media, which has been tricky with all the algorithms and sudden changes with this or that. We rarely do boosts, and if we do it's only 5 or 10 dollars. Seriously tho, no radio ads or billboards. Every once in a while we do a coupon mailer and place a small ad in rags like HPR.

It's important to me that we don't get too big for our britches, our staff of two just can't handle it if we get too many customers ordering all at the same time. It's always a blessing if we get a string of well spaced out orders, as made to order means just that.

Some folks just don't understand and probably won't ever. If people get pissed off at us for taking too long, or our setup, appearance, hours, they can go somewhere else, we’re just not for them. Which brings me to the safe place we try to be.

There's been times when we've had to oust those for not being respectful to others. Even though we're working hard to make tasty food, help find records and comics, or setup and do sound for live performances -- occasionally there's need to uphold our stance on politics, human rights, etc. We believe in feminism (equality for all), freedom of love no matter the gender and compassion for all. Thus we will fight for our beliefs, even though we may be the minority, we stand for what's right and uphold our place as a safe space for all in our community. Lastly, we choose to serve the arts and music community because it's so easily overlooked in this region. We hope to be here for those seeking culture beyond beer drinking, hockey, stock car racing, going to the lake etc. These are fun activities, but there is more to life.

Ojata Records and Comics and