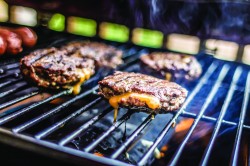 Burgers, burgers, burgers. Gotta love a great burger grilled in the great outdoors, with charcoal, wood or gas. Regardless, you are outside in the summer grilling. Damn, I get hot just thinking about standing over a robust fire in a wet bathing suit, watching slow cooked briskets on the smoker or greasy, delicious hamburgers getting ready for that toasty bun. It is summer in the Upper Midwest and it is a special time.

My charcoal grill is firing up right now for some really good charred peppers and onions to accompany the lead star, marinated skirt steak, and some salsa adorned fajitas. As always, I make a big fire for fajitas to get a really good char on the meat. There are also some chicken breasts (marinated and seasoned) ready to go onto the fire. Never waste a good fire.

Back to the burgers. I recently read about a burger competition for local restaurants and all the amazing creative combinations of food items that would make that “burger” the best in Fargo, as well as transform it to the furthest thing from a burger imaginable. Our forefathers fought for our independence and today people use the Declaration of Independence as a tool to remind us of who we are. There is nothing more American than a burger, and a burger represents a time in America worth respecting. There are ways to make a burger more interesting, aside from adding tater tots or whatever else is lurking in the kitchen to be dumped on the “All American” patty.

So for the interest of winning a competition and wowing your guests let’s just dump everything on the burger and give it a silly name. We can say it is “fusion” cuisine or “multicultural.” Hey we could have names for political burgers, white cop burgers and same-sex marriage burgers. Or we could just make a great burger. Meat, bun, tomato, onion, lettuce and cheese.

Let’s have a burger competition where there is a limit on, and a pantry of, what people can use to make their burger. Have them focus on the grind of meat, the quality of the bread and every other item involved in the process. Throw out the tater tots and all the other rubbish and get back to cooking an American tradition.

Speaking of which, the only true American traditional unadulterated cooking competition is barbecue. This is where you separate the men from the boys. No tater tots here, it’s all about a commitment to cooking. Cooking in a manner that was adapted from several generations and amalgamated into one that is specific to our culinary heritage, barbecue.

There is a beauty to the simplicity of good low country barbecue. It is truly American and, better yet, regional. You can divide the true ‘cue states up by their style of cooking barbecue: East Carolina, West Carolina, and the same applies to Texas, the Deep South and Kansas. The loyalty to the style and tradition runs deep as does the technique, which is funny, as the word “technique” would never be a part of a beer-and-bourbon-oiled conversation around a pit of wood-smoking beef and pork. You learn how to ‘cue from family and by doing it. That is the integrity behind the end result.

I understand that people want to be amazed. They want that burger piled high with items that no longer make it burger. Make it no longer able to pick up and bite with simply ketchup and mustard running down your chin. They are not selling burgers; they are selling something else, the “whatever” burger as opposed to the What-A-Burger.

Don’t misunderstand me. A fried egg on a burger works for me, as does coleslaw. Hell, Daniel Boulud won me over with his foie gras-enhanced burger. My point is let’s leave the classic alone on your menu. Burger, cheeseburger, bacon cheeseburger maybe even black bean veggie burger. Outside of that, lets create a new menu category, if for nothing else out of respect for our culinary heritage and the iconic sandwich, the hamburger. ‘Cue is fine -- nobody in their right mind would put tater tots on good ‘cue. Hopefully. Here’s to summer.