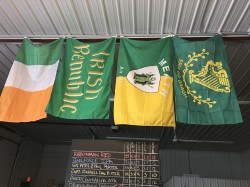 Late in March, just barely missing the St. Patrick’s Day weekend, Drumconrath opened the doors to their brewery and taproom in the rapidly growing community of Mapleton.

For Mapleton locals, being able to catch up with old neighbors or meet new ones while drinking a pint of great beer that was brewed in their own town is not only a new source of pride but also something that has never been legal in Mapleton since prohibition ended.

And while his laid back demeanor and humble persona might disguise his level of excitement, you can be certain that Sam Corr is happy to be bringing solidly crafted brews to a community that is excited to welcome him.

It’s safe to assume that when Sam’s mother bought him a “Mr. Beer” homebrew setup around ten years ago, neither of them expected it to lead to this. While the “Mr. Beer” method of brewing from prepackaged extracts yielded a batch of beer he called “nearly undrinkable,” it did give him a taste of the experience of brewing your own beer.

Rather than being disgusted by the taste and the experience, he felt encouraged to move directly to home brewing on a more conventional setup that he used and augmented for ten years before making the bold switch to commercial brewing for his own tap house.

Along with the knowledge he gained over the last decade, he brought with him a concept, a name that pays tribute to his family’s Irish heritage, and an exceptional recipe for an Irish red ale he named Ribbonman as a nod to the 1800s precursor to the IRA. And thus, in late March, he began pouring pints of the Ribbonman at Mapleton’s first craft brewery, which he named after the town of his Irish ancestors: Drumconrath.

When I visited, there were eight different beers on tap, two of which were on “nitro.” He also serves house-made cold-press coffee and cans of soda and pretzels but I was there for the beer.

I had a sense of it as soon as Sam poured me small samples of the lineup and sat them in front of me but by the time I had made it through the tap list it was certain: the beer that Sam brews is well worth the short drive from Fargo (it only took me 17 minutes on I-94).

While every beer he poured was beautiful in the glass, tasted true to style, and had a pleasing clean finish, there were a couple that stood out for me and are worth mention.

His previously noted Ribbonman Red is incredibly approachable and the touch of honey that has become somewhat common in red ales is done just right in this one. Slightly malty and somewhat sweet, this is one of two beers on tap at Drumconrath that should satisfy those that don’t normally drink craft beer.

The other is their Droim Eadrom (Drum Light), which is a very light ale that has a surprisingly crisp lager-like feel to it. For a taproom in a more rural setting, I could see this beer doing quite well for them as it presents an option that is probably far closer to a domestic lager than anything I’ve seen at other metro area taprooms.

While I always love a well crafted IPA, which Drumconrath has in its Gaelforce IPA, I am often far more excited when I see a porter on tap in the summer. As an occasional cigar smoker, I am always looking for a lower alcohol porter that is easy drinking in the summer but still has a solid backbone of chocolate and roasted malts to hold up to a dark maduro cigar.

If you are looking for a little bonus with your beer, ask Sam about the names of his beers and sit back and sip as he gives you one short history lesson after another. Some are bits of Irish history, others references to Irish drinking songs, and still others are historical references to our own community.

As for the community he has chosen to do business in, the residents of Mapleton seem excited to welcome him to their town. On the night I was there, nearly everyone who walked in for a pint called out to him by name and one ex-Fargoan gushed about how happy he was to get a little beer culture out to the town he now calls home.

With Irish flags hanging above the bar, Irish drinking songs filling the air, and nods to Irish history as beer names, Sam and Drumconrath are more than ready to bring wee bit of Ireland to a thirsty Mapleton community.