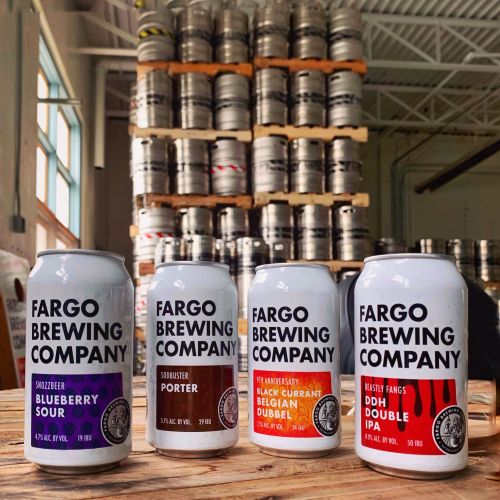 The famous 20th century Southern writer William Faulkner quipped, “Civilization begins with distillation.” Technically one brews beer instead of distilling it, but the sentiment still holds true. Fargo is no stranger to the art of fermentation, with local breweries stationed all over town to wet one’s whistle. The oldest of these alcoholic ambassadors is Fargo Brewing Company, which will soon be celebrating its 9th anniversary. Recently I had the opportunity to ask Jess Click, the taproom manager at the main Brewery location, and Natasha Dutch, manager of its second Ale House location, about the festivities.

“We have been celebrating our anniversaries in some capacity for years,” said Click. “It has ranged from concerts in the parking lot, to some local DJs and games, but always with a special anniversary beer release.” She added, “Also, we just love to celebrate our hard work each year and what better way to do that than with a fun party!” This particular anniversary’s festivities happen to be a little later in the year than usual so settling on the idea of fall festival only seemed sensible.

Fargo Brewing Company’s 9th anniversary celebration will be taking place over two days: Thursday, October 17th and Friday, October 18th at their main location on University Drive. The event is family friendly but naturally minors will have to be accompanied by a parent or guardian who is of age. Activities are planned both indoors and outdoors. “We will have heaters and fire pits outside for everyone to warm themselves and of course make s’mores!” said Click. “We want everyone to enjoy the outside and fall but with Mother Nature we always have a backup plan. We urge everyone to dress warm so they can enjoy all the fun activities we have planned.”

The activity that Click wanted to highlight the most is Friday’s Chicken S*** Bingo, which is probably exactly what you think it is. Tickets are $2 each per round and cash prizes are given away to the winners. A portion of the proceeds will also be donated to Lend a Hand. “It is definitely a new spin on bingo and we will be using Natasha’s friendly backyard chickens to pick the winners,” said Click. “We are so excited to do this and we are hoping it is something we can do more in the future.”

If betting on barnyard fowl droppings isn’t your cup of tea, there are still plenty of other activities on the docket. Thursday will feature a Big Boy Pop-Up, the Sodbuster Beer release, and special beer infusions, along with live music by Jimbo Jones and the Sneaky D’s, Big and Hungry, and Matty J. Friday will feature Big Boy and Luchadores, the release of Fargo Brewing Company’s 9th anniversary beer Black Currant Belgian Dubbel, the aforementioned bingo, horse and carriage rides, and music by Tom Peckscamp, Nate Pitcher & Steve Burket, and Cropdusters. Hildebrant Farms will be selling pumpkins, and there will also be a photo booth, a pumpkin painting station, face painting, S’mores, and bobbing for apples.

When asked to what Fargo Brewing Company owes its success, Click adamantly stated, “The BEER! Always the beer! We strive to continuously send out the best quality beers to our patrons. The events and live music are a really fun bonus!” Her personal recommendations for beers to try are Sodbuster, and old Fargo Brewing staple that people have been clamoring to have brought back, as well as the 9th anniversary beer, the Black Currant Belgium Dubbel. “This is a rich, malty beer that is conditioned on black currants for an extra burst of fruit flavors.”

There is a lot of fun to be had and beer to be drank at Fargo Brewing Company’s 9th anniversary celebrations. But at the risk of sounding cliché, remember to drink responsibly, tip your server, and have fun.

Chicken Shit Bingo: 4pm-we will continue to do rounds through the night as long as we have interest.

Hildebrant Farms will be ready to sell pumpkins at 4 p.m.