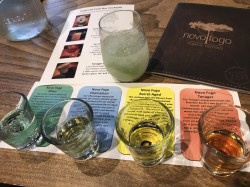 On Monday I had a special opportunity to learn more about Brazil’s favorite distilled spirit, cachaça, directly from the founder of one of the highest quality brands of cachaça, Novo Fogo.

While Dragos Axinte himself has quite a fascinating story that could fill my entire column, it was the premium quality, certified organic spirit that Novo Fogo produces that had drawn me to the special event at Rosey’s Bistro and Bar on Broadway.

This particular distillery is located at the intersection of mountains, rainforest, and ocean in the town of Merretes, in the south of Brazil, and their organic sugarcane fields are only feet away from the jungle, which not only influences the flavors and aromas of the spirit they produce, but affects the entire attitude of the company and the way in which they approach production from the field all the way to the bottle.

To simply call this spirit organic or sustainably produced doesn’t begin to tell the whole story of their passion for being good stewards of Brazil’s precious and often endangered resources. For me, perhaps the most exciting part of their commitment to sustainability is what it means to the product you taste, starting with the sugarcane itself.

Being that their field is located so close to the jungle, it gets misted by the super clean rainforest air that is full of a buffet of aromas and flavors. Bananas, flowers, tropical fruit, and even salt are imparted to varying degrees into the spirit and the result is incredible, especially when aged in an oak barrel.

The social hour, “preview” tasting began with energetic Brazilian music and a small caipirinha, which is a classic and simple Brazilian cocktail made with Novo Fogo Silver Cachaça, sugar, and muddled lime.

Elijah Larson, mixologist at Rosey’s Whiskey and Wine Bar, created this drink in the traditional way of stirring it, which resulted in the drink transforming over time as the sugar dissolved further and the strong lime bite of the first sips faded into a slightly sweet finish by the time your glass was emptied.

As we finished the last sips, Novo Fogo founder Dragos Axinte was introduced and began his presentation with maps and images of the region in Brazil where his cachaça is made, and the importance of their close connection to the rainforest and what it means to both the flavor of their cachaça and the approach they take in producing it.

His respect for the sugarcane and the land means they take great care to be good stewards, and the passion they have for this commitment shines through in both the neat sample of their unaged Silver Cachaça as well as his presentation. The name Novo Fogo translates to “new fire” which reflects the fire inside that brings them to craft great spirits in a way that respectfully cares for the land and ignites a revolution within the entire Brazilian cachaça community that brings about increased sustainability.

Their distillery is designed to lead the way, by using gravity to both feed water and push the distilled product throughout the system without the use of pumps. They also have a custom still system that recirculates heat that would otherwise be lost, resulting in a 20% reduction in energy needed for operation.

Distilling can often create a significant amount of waste and byproducts and Novo Fogo uses many byproducts as fertilizer for the field or fuel for the fire. They even power their vehicles with the “head” and “tail” of the distilled cachaça.

To help take care of both the land and deliver a great product they harvest all of the cane by hand with machetes instead of burning away parts of the plant; and equally important is the way they take care of those hardworking employees by paying them fair hourly wages instead of by harvested weight, offering free education for employees and their children, maximum ten-hour shifts with mandatory breaks, and worker health programs and stop-smoking incentives.

Ultimately though, the customer pays for a product, and the Novo Fogo line delivers quality and variety with a great lineup of Brazil’s most popular spirit.

The ways in which they age in American wood barrels (mostly repurposed ex-bourbon casks and sometimes in combination with repurposed Brazilian wood barrels) not only helps preserve Brazil’s precious and nearly extinct hardwood trees but also imparts distinct characteristics that make this spirit drink more and more like whiskey as you move further along in age statements.

We were fortunate enough to sample six different expressions of varying age and blends and though everyone had different favorites, all agreed that the quality was superior throughout.

Cocktail enthusiasts love using it in a caipirinha and fans of light spirits with robust mouthfeel should find the Silver quite pleasing to sip.

The Chameleon is another that bartenders love to utilize, due to its oak-kissed notes that blend with the rainforest funk and sugarcane without overpowering it.

Fans of scotch and bourbon will probably gravitate more towards the Tanager or the Barrel-Aged expressions, respectively.

Bourbon fans that are oak hounds will want to seek out the three-year and seven-year expressions to get a feel for how the Brazilian heat and humidity accelerate the oaking of the spirit in a way that Kentucky doesn’t.