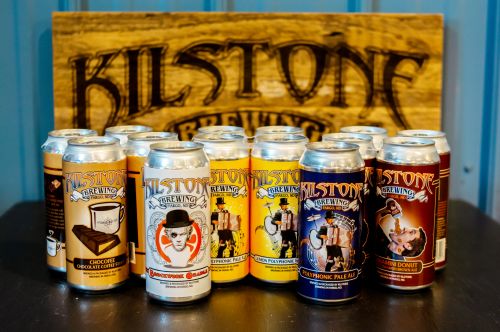 Ever wish you could go to your favorite brewery without leaving your house? Finally, you can (sort of). Kilstone Brewing is now doing limited can releases of some of their most popular beers, which can be found at their brewery taproom, as well as in select retail locations in Fargo and West Fargo.

The brews currently available in cans are:

In addition to these brews that have all proven to be successful in the taproom, Kilstone will also be releasing an experimental series.

“We’ll have an experimental label that will give us the opportunity to throw some new, fresh beers out there that might not come back ever again,” Chris Larson, Kilstone’s Operations Manager said.

So why has the local brewery decided to bless our refrigerators with their insanely good beer?

Kilstone’s brewing system is small — only two barrels, Larson explained, which means that one brewing of a beer only generates 20 cases of beer. One of the benefits of a can release is that it gets Kilstone’s delicious and unique brews into the hands of customers who can’t make it to the taproom.

Tucked away in North Fargo’s industrial park until their new location opens up downtown, Kilstone also hopes the can release will help to get their name out before the move. Not only that, but the can release allows the brewers to move through beer more quickly, ensuring its freshness.

While there are many pros to the limited can release, it is also evident that Kilstone has been enjoying the chance to get creative with label designs. Beau Fraase, the artist who designs the can labels, says that designing the labels is a collaborative process.

First, he sits down with Grant and Brock Wigen — the brothers that make up Kilstone’s brewing team — where they tell Fraase the concept they want for the label. They all spitball ideas together. “Then I just go home and conjure something up until it looks good,” Fraase stated.

Fraase puts a lot more work into it than that, however, which is apparent from the hilariously meta Cinnamini Donut can, which features a man pouring mini donuts into his mouth from a beer can — the very same Cinnamini Donut can.

The one man band playing different instruments on the label? That’s Beau Fraase himself. Originally a working draft of the design that Fraase planned to update, the label looked great to the Wigens, so it stuck.

Kilstone Brewing is a family-owned local business, and brewing brothers Grant and Brock have been at Kilstone since it was founded by their father, Randy Wigen, in 2015. While their can releases are bringing brewery-quality into the homes of many, ironically, the Wigens started the brewery in order to stop brewing at home.

“Their parents started the business originally,” Larson said, “as a way to get their dad’s home-brewing equipment out of the house and into an industrial location.”

Brewing out of the house for three years now, Kilstone is planning yet another move. Their new location, which will be located above Atomic coffee, will feature a stellar view of Broadway and the future Block 9 building.

Kilstone’s future downtown location will be another testament to the evolving beer and brewery culture that has taken shape in Fargo. Tasting different craft beers and touring local breweries has become a weekend ritual for Fargo residents, and Larson believes that the local brewing craze has helped this culture to take shape “not only locally, but regionally.”

“We get a lot of people from out of town that are coming just because we have enough breweries now for them to be interested in making a weekend out of it and hanging out.”

Fargo-Moorhead’s effort to get tourists to the city is paying off, and has especially benefited local businesses like Kilstone.

“We are really fortunate that we get a lot of support from the Fargo-Moorhead Convention and Visitors Bureau,” Larson added. “They have a craft beer tour that they do, and that’s really done a lot to build our business and get people from outside of our community interested in what we’ve got going on here.”

Shared enthusiasm, mutual support for each other, and love for beer is clear in Fargo’s brewing industry, and has given the beer culture a chance to flourish. Larson feels lucky to work in an industry where other business owners can rely on each other for help and support. Up against the Budweiser’s of the world, Larson said, “we all feel like we have to stick together.”

“Often, we’ll run into sticky situations where we need some advice, or maybe a piece of equipment breaks, and it’s so awesome that we can call on our fellow brewers. People that would normally be viewed as your competition are all of a sudden helping you out.”

Fargo is now home to upwards of 9 different breweries, some with multiple locations, such as Drekker’s Brewhalla. Drekker opening their new location this past September was “really a good thing for all of us,” Larson said, “because it’s just going to increase the beer tourism in our city.”

Kilstone’s new location will only boost this culture even more, and Larson says they’re looking forward to being in the middle of things downtown.

Until then, visit Kilstone’s current location at 764 34th Street North in Fargo that features a laid back atmosphere and live music on Wednesday nights. While you’re there, pick up a pack of their limited release cans, which they will be updating and distributing several times a month.

You can also find Kilstone’s limited release cans at all Fargo Happy Harry’s locations, Bernie’s (on South University), Stamart Liquor Mart (just west of the 12th Avenue bridge), and Bottle Barn Liquors in both Fargo and West Fargo. Not every can will be available in every store, however, so make sure to hunt down your favorite beer before they’re gone!