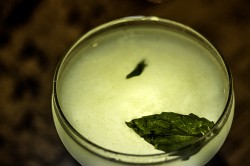 It’s the dawn of the seventh annual HPR cocktail showdown. With at least 30 participating bars seeking the same goal and asking the same question: Who makes the best drink in town? Where the drinks are stiff and the competition is stiffer. Three fearless judges enter the ring judging one shot and one cocktail at each establishment rating them 1-10 in three categories: presentation, flavor and creativity. It’s a tough job but someone has to do it.

During week one we visited Andrew Hardy at Usher’s House, Todd Snelling at Mezzaluna and Davin Henrik with Nick Harr at The Boiler Room and this is what we were presented with.

Usher’s house is located at 700 1st Ave. N in Moorhead in a beautiful WPA-era stonework building along the mighty Red River. Usher’s not only features one of the area’s most picturesque patios but also utilizes two separate unique dining areas. Their menu features not only dinner options but also pub fare including shepherd's pie, fish and chips, an array of appetizers and many other options. Their cocktail menu exhibits a collection of signature and seasonal cocktails, signature martinis and a mighty fine wine list. 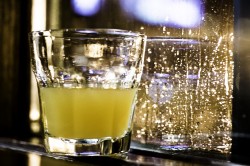 The shot: The Notorious

The Notorious gets its name for the Dublin-born MMA fighter Conor McGregor who is also known as The Notorious. The shot contains Pernod absinthe, Drambuie, Frangelico, Chambord and orange juice, and had a pleasant anise heavy aroma. Hardy’s shot lives up to its name because after a few it’s sure to knock you out. 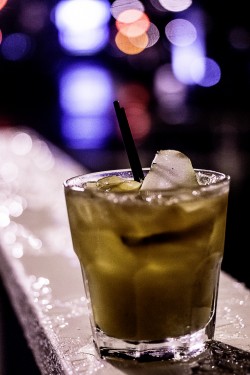 This cocktail was inspired by a visit to New Orleans while Hardy was on his honeymoon. For this smoky classic cocktail, Hardy used a smoking gun and filled a decanter with hickory smoke for a more pronounced flavor. The overall preparation was a treat in itself to watch. The cocktail utilized orange juice squeezed before our eyes, Chartreuse, Patron, clove syrup, honey, angostura bitters and a “shrub” created by Hardy.

A shrub is an acidulated beverage and originated prior to the use of refrigeration. It was a way of preserving fruit long after it had been picked. Hardy’s shrub contains blackberries, sugar and apple infused in a cider vinegar. We must also add that it is garnished with a roasted pear to enhance the smokiness.

Mezzaluna is located at 309 Roberts St. N. They boast fine artisan cocktails and fare. They feature both a dining menu and a superb list of Alley Fare for both late night and happy hour specials, featuring their fine hand-ground burgers, baked brie, savory soup and more. The building itself has a fine urban aesthetic in which you can enter from the street or alley. The decor is classic yet contemporary with its signature clamshell booths. Be sure to check out their signature cocktails and impressive wine list. 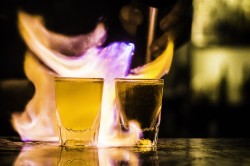 The shot: Ala Louisiana

Ala Louisiana was inspired by the Sazerac, which some claim is America’s oldest-known cocktail. The main ingredient is Bulleit rye. Add angostura bitters, Peychaud’s bitters and a theatrical absinthe flambe flourish that will leave fellow barflies open mouthed and awed. The name came from the origins of the main ingredient, Bulleit rye ala New Orleans, La. 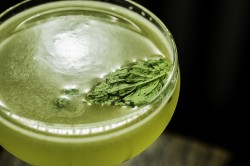 The name of Nectar d’or came from the gold coloration and palette-pleasing sweetness and also serves as a play on the use of a honey-based simple syrup. The drink contains Opihr (a spiced oriental gin), Licor 43 (a Spanish liqueur with hints of citrus and vanilla), Benedictine, basil, yuzu puree, honey simple syrup and a chartreuse rinse and a basil garnish. This particular cocktail was inspired by “The bee’s knees,” a cocktail that is one of the house’s signature cocktails. Nectar d’or is served in a coupee glass to prevent dilution.

The Boiler Room is located at 210 N Broadway. Whether you enter through the front or back alley, you’re getting to the bottom of Broadway. If you opt to enter through the alley the patio is definitely worth noting in the warmer months. The Boiler Room has an extensive menu starting with breakfast and ending at late night. The drink menus are equally impressive and the beer list is as long as the wine list, and do we dare mention the roster of signature cocktails? 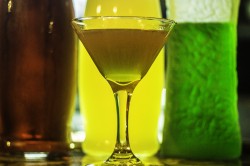 The Midorable came about when Harr was experimenting with the melon-flavored liqueur Midori. The Midorable contains Cock n’ Bull cherry ginger beer, Skinos (a Mediterranean aperitif), lemon juice and cranberry juice. The shot is served in a 4 oz cocktail glass and is a shot to sip on. It is a layered shot and the Midori sinks to the bottom -- not only is it sweet-tart-n-tasty but it’s cute too. Hence the name. 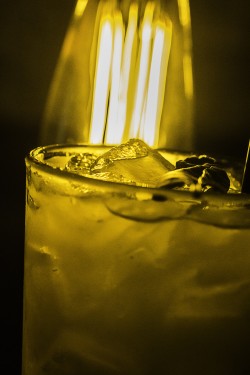 The Bizon Refresher pays homage to our hometown heroes … the Bison. It contains 2 Docks vodka, Midori, lemon juice, lime juice, simple syrup, mango syrup and a shot of water to smooth out the syrup. It is garnished with an oh-so-slightly smoked basil leaf to add a bit of aroma and is served in a tall glass. It lives up to its name with the classic green and gold coloration and serves as Henrik’s take on the classic mojito.