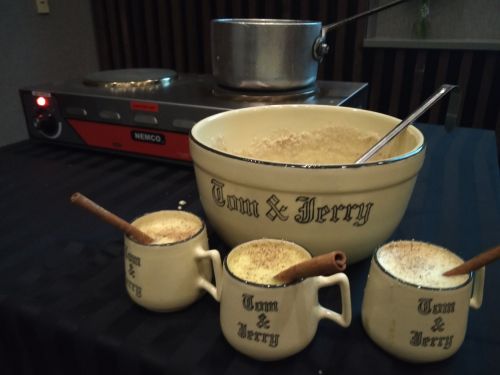 Our sixth week of the Cocktail Showdown was another tripleheader that had us hotel hopping before ending the night on the western edge of Fargo, in the vicinity of the mall. When we go out and do the judging for this competition, I always like to imagine for a moment that I am a visitor to our town and view the experience through the eyes of someone who doesn’t have an insiders look at the industry. Hotel hopping and seeking out hotspots located near the mall makes it quite easy to put myself in that mindset.

You may have seen a news report recently that referenced the Radisson’s request and approval for an addition to the renaissance zone downtown that would expand the footprint of the zone a block and a half to include the original downtown “skyscraper” hotel. The goal for the developers is to improve the exterior, lighting, and some event space improvements to add to the remodels and improvements that have already been made since the Brandt Group purchased the hotel a few years back. One of the first changes to the hotel a few years back was a redesign of the second-floor restaurant and bar space known as “Level 2”. Most recently, both spaces went through some significant personnel changes as well when Chef Mike Holtz was brought on board to lead the kitchen and Jason Laub was tasked with managing the bar program. With all the new energy coming at this space from all directions, the future for the Radisson and Level 2 is worth paying attention to or better yet, participating in by paying them a visit. 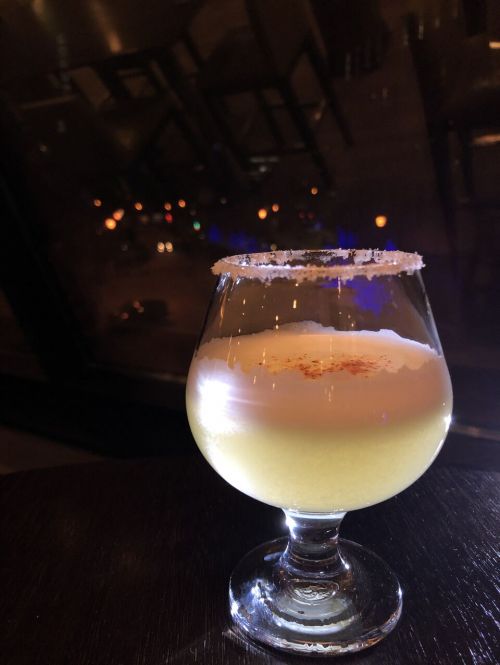 Vince began this take on an egg white margarita with Don Julio Reposado and orange bitters dry shaken with egg white. To that, he added some ice and lime juice before shaking to chill. He rimmed a snifter glass with kosher salt before straining the chilled cocktail into it and then topping it with a sprinkle of house chili seasoning that floated right on top the egg white foam. Vince mentioned that the chili seasoning float was intended to add texture and the egg white with the salted rim and salty chili seasoning really did create an interesting mouthfeel and a bit of kick to this take on a classic. 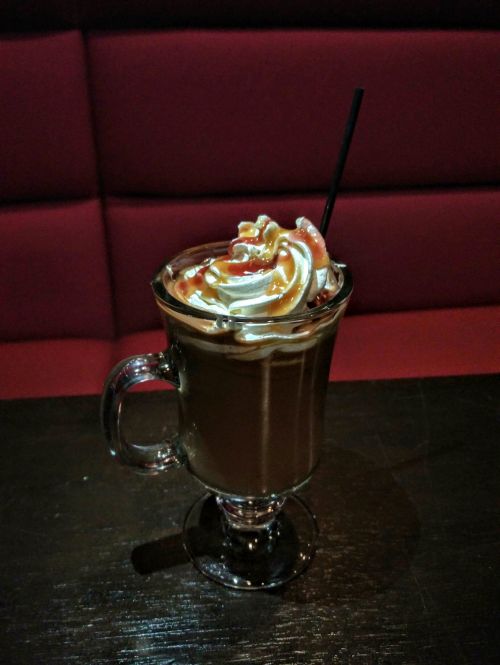 This recipe began in the kitchen, with the Radisson’s pastry chef, Johanna Romero mixing up a rich chocolate base spiced with tree nuts and other unknown goodies. To this heated up chocolate, Vince added Patron XO Cafe and whipped topping that was drizzled with a caramel sauce and a raspberry sauce. The thickness and richness of the chocolate base almost had a pudding-like consistency and was certainly loaded with chocolate. There was just a touch of spice and a bit of nuttiness that played off the coffee to add some depth to an otherwise sweet dessert drink.

We headed from downtown Fargo to the mall area where we were treated to Molly Fontaine’s entries for the Spirits Lounge at the Holiday Inn. If you haven’t been there in the last few years, you will certainly be stunned when you walk into the chic, modern space and the quality of the drinks served up by Molly meets the feel of the room. This year, Molly brought us into a private room that was partitioned just off the main bar space and provided us a bit of privacy and a more intimate presentation of two fairly involved drinks. 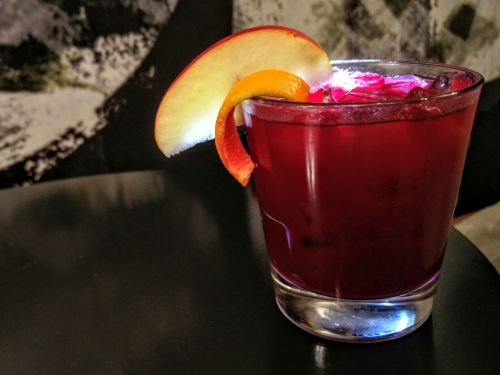 Molly is a huge fan of the Office and paid tribute to Schrute Farms with this cocktail centered around Dwight’s favorite root vegetable, the beet. Molly first created a puree with beets, blackberries, ginger, fresh orange juice, lemon juice, apple juice, and an organic Lady Alice apple. The particular variety of apple was selected at Prairie Roots Co-op with a great amount of help from the manager who all but insisted she taste almost a dozen different samples before settling on this particular variety. To the puree, she added an ounce and a half of Woodford Reserve Double Oaked bourbon and a half ounce of a house made honey walnut simple syrup. The mixture was stirred in the glass with ice and then garnished with a slice of apple and an orange peel twist that was expressed over the top of the drink and then rubbed along the rim and sides before being rested on the rim.

As expected by the color and the name, the beets were certainly the centerpiece of this creation and the beautiful earthiness is still there but tempered by the citrus and apple juice and brightened by a perfect amount of ginger. The walnut in the syrup was there, barely perceived, but kept being discovered on the finish, in conjunction with the whiskey. That long, creamy finish of the double oaked bourbon followed through to the end in a way that tied it all together while highlighting the beet and making me think “Wow. I need this beet right now.”

Family traditions are becoming more endangered every year and traditional Tom and Jerry serving sets seem to be all but impossible to come by these days. When we noticed the traditional serving set sitting there, the private side room presentation became even more appropriate for the use of this precious heirloom. Tom and Jerry batter recipes can all vary quite dramatically but regardless of what the ratio of eggs to butter to sugar, they all require enough skill to prepare that the drink seems to be disappearing from holiday celebrations.

Molly’s recipe calls for a dozen eggs (separated), butter, sugar, cinnamon, allspice, nutmeg, vanilla extract, and a touch of cream of tartar. The tartar is added to egg whites and whipped until it has a meringue-like consistency with stiff peaks. The butter and sugar are added to the egg yolks and whipped until smooth and fully blended and then that mixture was hand folded into the egg whites before folding in the spices and a couple of ounces of rum. The batter is then covered and stored in the refrigerator for at least three hours to set.

Molly’s special twist on her family recipe is to make her own “golden paste” that was used to make “golden milk”. The paste consisted of water, turmeric powder, ground pepper, cinnamon, cardamom, coconut oil, and raw honey and is said to have health benefits that include anti-inflammatory properties. To make the milk, she added the paste to a warmed up vanilla almond milk and stirred it until it was fully incorporated. To assemble the hot drink, she preheated the serving mugs with hot water and then added an ounce of Far North Spirits Alander Nordic Rum and an ounce of E&J VSOP brandy before topping with a heaping spoon of warmed up Tom and Jerry batter. She then stirred in some warm golden milk until the drink was nice and foamy before garnishing it with some shaved nutmeg and a cinnamon stick which was very slightly shaved then set in the mug. The drink warmed our bellies and to drink it from a cherished family heirloom and see the time-honored traditional drink being kept alive in such skillful hands warmed our hearts.

After a very short Uber ride from the Holiday Inn, we found ourselves ending the night at Lucky’s 13 Pub off 17th ave and 43rd street in south Fargo. Known for a large menu with large portions, Lucky’s 13 has menu selections that should please the most finicky eater and their tap selection features a mix of domestics and local and regional favorites. One of my favorite features of the room is their amazing chain of ceiling fans that are operated by a single motor. Next time you pay them a visit do me a favor and follow the pulleys until you find what is moving every fan blade. Though we did order an Italian Nachos with the meat on the side, we were mainly there to taste the two entries by another repeat entrant, Kayla Erickson. 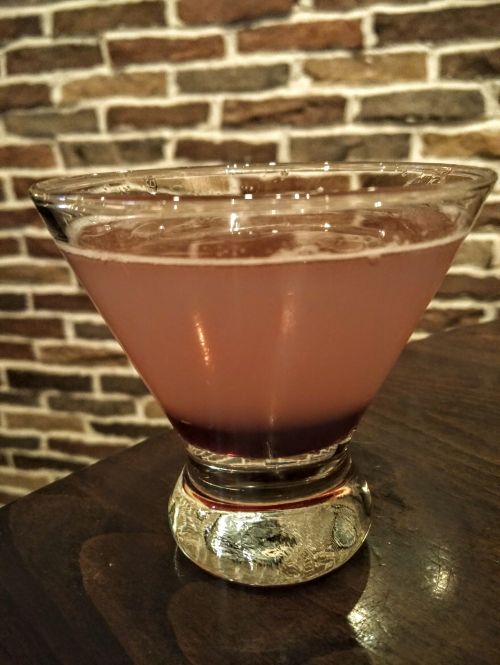 Kayla added Western Son Blueberry Vodka, 44 North Huckleberry, Chambord, and a house sweet and sour mix to a shaker with ice before shaking vigorously to dilute and chill. The mixture was strained into a stemless martini glass and a bottom float of Filthy brand black cherry juice was added to create a nice red layer under the slightly pink top of the drink. The triple berry blast with a syrupy sweet cherry finish almost reminded me of that old summer treat, the Bomb pop but with a bit more depth of flavor due to the 44 North Huckleberry vodka. 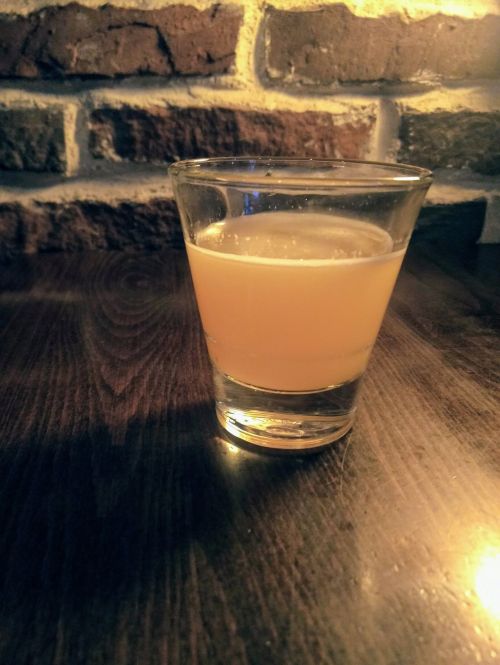 As Kayla reached for the 44 North Nectarine vodka she explained that this brand of spirit is made near her hometown and a line of products she is proud to pour. To the flavored vodka, she added Malibu coconut rum and some orange juice before shaking it with ice. The mixture was then strained into a shot glass and topped with orange flavored Liquid Ice energy drink. The coconut rum came through without really overpowering the citrus flavors that the drink was named for. Her appreciation for the spirit came through in this shot as a nice hint of nectarine just underneath the coconut, orange juice, and syrupy energy drink was always there.