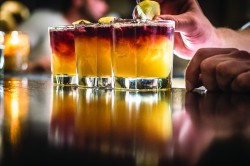 Week three of the cocktail showdown featured the “Sonoma Sour” and the “Chocolate Covered Cherry” from Charles Smith at Porter Creek Hardwood Grille, “The King Edward” from Brady Johnson at The District Waterhouse and Kitchen, and “The Crackle Pop” and “The ‘ol Noggin” courtesy of Josh Hajek at Fargo Billiards and Gastropub.

Porter Creek Hardwood Grille is located at 1555 44th St. S in Fargo. Having opened in June of this year, it is a relatively new addition to the F-M restaurant scene. Porter Creek features a unique atmosphere almost reminiscent of an upscale resort lounge, complete with a crackling fire and candlelit table settings. We wandered through a beautifully landscaped patio complete with open fire and meandering stream. In fact, the restaurant was inspired by California wine country. The restaurant features a full menu with a wide variety of fare from burgers, pizzas, sandwiches, steaks, pastas, field, fowl and seafood along with an extensive wine list, and a wide variety of spirits. 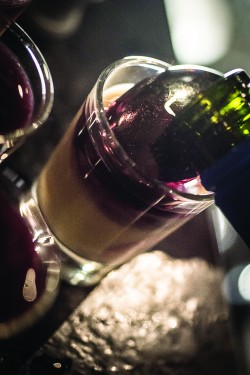 The Drink: The Chocolate Covered Cherry

The Chocolate Covered Cherry contains Stoli Vanilla, creme de cocoa, Disaronno, cream and Amalia Malbec. The result is a deliciously sweet, velvety, layered dessert shot. Not only does it taste like its namesake, but the Malbec (which is a red wine) floats to the top, making it look as delicious as it tastes.

The Drink: The Sonoma Sour

The Sonoma Sour is a wine cocktail containing Dickel rye and housemade sweet and sour, which contains a combination of freshly muddled lemon, limes and a bit of sugar. The cocktail is topped with Coppola Shiraz. The Sonoma Sour is Smith’s take on a New York sour combined with a wine cocktail. Porter Creek is known for its wine selection and Smith wanted that to reflect in his creation; he also wanted to create something that would be simple and effective for a high-volume restaurant. In fact, the Sonoma Sour won an inner-company contest and made it on to the fall cocktail menu, which will be launched in November.

The District Waterhouse and Kitchen

The District Waterhouse and Kitchen is located at 3179 Bluestem Drive in West Fargo. The environment has an upbeat, upscale-yet-casual feel to it. It has an extensive wine, beer and whiskey/bourbon list. The menu features housemade burgers, soups, salads, sandwiches, pizzas, appetizers and desserts. 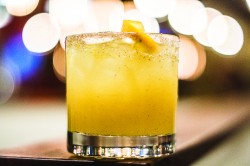 The King Edward contains The King’s Ginger liqueur, a Dutch liqueur created for Berry Bros. in 1903 for King Edward VII -- hence the cocktail’s namesake. It also contains freshly muddled lemon, limes and oranges combined with black walnut bitters. Topped with Sprite and rimmed with a delicious spice combination, it is a delectable seasonal cocktail.

Fargo Billiards and Gastropub is located at 3234 43rd St. S, in Fargo. Fargo Billiards and Gastropub has a lively environment complete with 57 pool tables, a restaurant and separate bar area, and features events like Tuesday night trivia, making it friendly for all ages. The menu features a wide variety of fare, such as burgers, soups, salads, sandwiches, pizzas, etc. 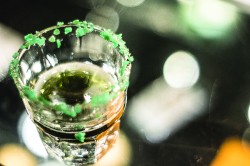 The Cracklepop contains blueberry schnapps, Kahlua, creme de cocoa, Island Punch Pucker and rimmed with pop rocks. The shot is Hajek’s take on the grape tootsie pop shot. Raul Gomez, one of the esteemed judges, described it best: “It tastes like childhood.” 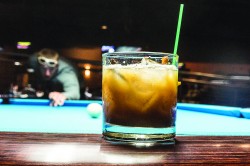 The Drink: The ‘ol Noggin

The ‘ol Noggin contains housemade pumpkin puree, maple syrup, cinnamon, nutmeg, egg white, Grand Marnier and Woodford Reserve, and it is garnished with a cinnamon stick and an orange twist. It was inspired by the Old Fashioned and egg nog, hence the name “The ‘ol Noggin.”