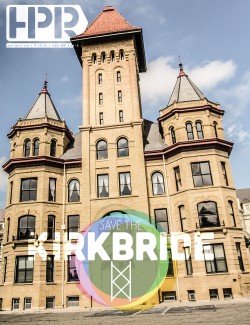 Sometimes referred to as “the castle on the hill,” the former Fergus Falls Regional Treatment Facility also known as the Kirkbride building has inspired shock, awe, inspiration and provided economic stability to a community for well over a century. It housed the mentally ill, developmentally disabled and those battling substance abuse issues.

The former Fergus Falls State Hospital was once the largest employer in Fergus Falls, Minn. “You can’t talk to anyone in Fergus Falls that doesn’t have some kind of a connection to the Kirkbride,” says Michele Anderson, rural program director for St. Paul-based arts organization Springboard for the Arts. It once supported farmland, lush orchards and livestock barns creating a sustainable community that even included an auto shop, a chapel and Minnesota’s first in-institution beauty parlor.

The treatment facility closed its doors in 2005 and the building sat empty. The main structure is 700,000 square feet (the length of eight football fields) and has faced the threat of the wrecking ball many times over the years. “The city council wanted demolition for the longest time. They were intimidated by the size and scope of the building,” Anderson said. Luckily the Kirkbride has some allies.

The Friends of the Kirkbride is a grassroots advocacy group that has been active in the Fergus Falls community since the first conversation suggesting demolition, 11 years ago. Their mission is to educate the public regarding the significance of the building historically and architecturally.

Fast forward to 2011 after Springboard for the Arts-Lakes Region opened its doors next to the Lake Region Arts Council office. Their mission statement is to “mobilize rural artists as leaders.” 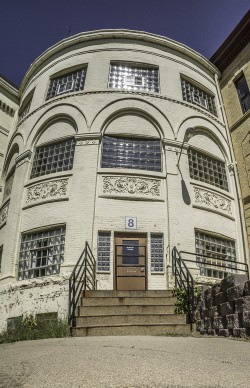 Naturally, Friends of the Kirkbride approached Springboard with the idea of using the arts to propel awareness of the fate of the building.

Propel it did. The Hinge Arts program was launched through Imagine Fergus Falls to create opportunities to connect both artists and community members, allowing them to survey themes of transition, innovation and connection while acknowledging both the past and future of the community.

“We’re not looking for an enormous arts center,” Anderson says, “we’re hoping to achieve an authentic solution to preserve the building.”

The Hinge Arts Residency Program offers writers, filmmakers, musicians, visual and performance artists stays of from two to 12 weeks on the grounds of the former state hospital, in a building that formerly housed male nurses. Not only has the Hinge Arts residency attracted artists from around the nation but from Iceland, England and Japan.

The weekend of Sept. 17-20 will be the third annual Kirkbride Arts and History Weekend. The event is led by Springboard for the Arts in partnership with the Otter Tail County Historical Society, The Friends of the Kirkbride, Kaddatz Galleries and The Center for the Arts.

The Arts and History Weekend not only generates stories within the community; it also acts as a showcase of local talent as well as the talents of the artists in residence curated by Springboard for the Arts.

“With the [Hinged] program, I feel that we have brought awareness of the arts and what the artists can do in their community,” says Naomi Schliemann, artist development coordinator for Springboard for the Arts-Lake Region, “to create work and bring attention to what’s important.” 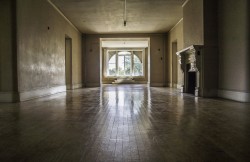 Highlights of the weekend will include “Walking the Tightrope,” a play written by Lowell Carpenter, a local retired English/Drama instructor. The production features local cast members and original music. Carpenter utilized excerpts from “The Weekly Pulse,” a paper written and published by the hospital staff, and a diary from a patient that was donated to the museum in 2010.

The diary chronicled a young man’s experience at the hospital in 1962. The title of the play was taken from a line from the diary in which the patient felt like he was “walking a tightrope over the grand canyon of depression.” The author of the diary will be present during a talk that will follow the production.

The Center for the Arts is also hosting an exhibition of Kirk Williams and Wally Gereszek’s work. Williams worked as a human services technician at the state hospital and is still a working artist. Wally, then 30, was a patient that spent nearly half of his life in the institution.

Williams noticed that Gereszek found drawing to be therapeutic and learned that Gereszek produced nearly 15 drawings a night, took him to his studio and gave him a crash course in color theory, which lead to a collaboration involving William’s drawing and Gereszek’s coloring.

Gereszke’s work serves as an excellent example of art brut or “outsider art.” His first show was in the main foyer of the state hospital in 1982. The collection at The Center for the Arts was acquired from members of the community once Springboard for the Arts placed a call for the former patient’s work.

Robert Kirkbride will also be present during the festivities. He is an architectural design scholar with the Parsons School of Constructed Environments and a distant relative of Thomas Kirkbride, who was an advocate of moral treatment for patients.

The most distinguishing part of a Kirkbride building was the centralized administration building and staggered corridors which separated patients from one another according to their sex and condition. The staggered construction of each wing allowed for natural light and fresh air, which Kirkbride believed was integral to the healing process.

Though he believed in a humane approach to treatment, lobotomies and electroshock therapy were still a very real treatment and had their own wings at the institution.

Robert Kirkbride has been on a crusade to preserve Kirkbride institutions across the country. There were once 30 throughout the nation -- now there are less than 15. He will lead an idea-sharing session at The Spot Panini & Wine.

The Spot also features a group exhibition, titled “Beauty is therapy,” which is a collection of pieces inspired by the “castle on the hill.” Eric Santwire’s black and white photograph of two women donning vintage attire outside the Kirkbride at last year’s art and history weekend had an almost Ralph Eugene Meatyard quality to it. The exhibition explored both issues surrounding mental health and the Kirkbride building in a variety of mediums.

There will also be a few film screenings on the Kirkbride grounds on Saturday night. Ernie Sundgren’s “Fergus Falls” is a collection of 8mm home movies from the 1950s that documented community events. The films came to light when artist-in-residence filmmaker Nik Nerburn met one of the locals and the two got to talking. This led to the two fixing an 8mm projector and rediscovering Nerburn’s grandfather’s home movies.

The films were initially screened at The Center for the Arts and the audience was encouraged to talk among themselves, share memories and provide the score to the soundtrack through their own conversations.

Nerburn is based in Georgia, and he will be making his way back to Minnesota for the screening of his experimental documentary “In the shadow of Paul Bunyan.” The film was shot with 16mm film and explores the plight of Paul and Babe as complex heroes in Minnesota’s own creation story through forgotten footage.

Portland-based artists-in-residence Rosie Yerke and Robert Uehlin will also be a part of the festivities as they combine dance and film by means of screen dance. The piece that will be screened is a work-in-progress of a film, estimated to be finished in October. “We were very fortunate to be a part of a residency program and event that centered around such a historic building,” Yerke says. “We can’t wait to put our spin on it … quite literally.”

Other parts of the festivities are a bike ride for mental health, a community picnic and cemetery walk.