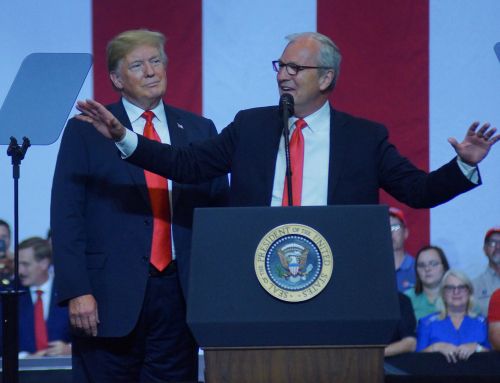 FARGO – Time after time, Congressman Kevin Cramer makes light of sexual misconduct allegations and of provisions in law protecting women against violence. Repeatedly, he has mocked women who do not toe the conservative line, and has threatened violence against Native women.

Most recently Cramer said on CNN and on local Jarrod Thomas radio show that the claim against Supreme Court pick Brett Kavanaugh was “absurd,” and he justified Kavanaugh’s actions approximately 30 years ago because he and his accuser were drunk and that attempted rape “never went anywhere.”

“If to the degree there was any legitimacy to Anita Hill’s claims, and she tried and didn’t prevail – Clarence Thomas did and America did – this case is even more absurd because these people were teenagers when this supposed alleged incident took place,” Cramer said on the Jarred Thomas Show.

“Teenagers. Not a boss-supervisor-subordinate situation, as the Clarence Thomas-Anita Hill situation was claimed to be. These are teenagers who evidently were drunk, according to her own statement. They were drunk. Nothing evidently happened in it all, even by her own accusation. Again, it was supposedly an attempt or something that never went anywhere.”

California professor Christine Blasey Ford, who is Kavanaugh’s accuser, said in high school they were at a party. Kavanaugh was “stumbling drunk” and she had one beer at the time. Ford said Kavanaugh pinned her down on a bed, attempted to remove her clothing, and covered her mouth when she tried to scream.

“Congressman Cramer’s comments are disturbing and they don’t reflect the values of North Dakota,” Heitkamp said in a statement on Twitter.

“North Dakotans pride themselves on their kindness, empathy, and a strong belief in looking out for one another,” Libby Schneider, the campaign manager for Heidi for North Dakota said. “Congressman Cramer’s comments yesterday tell us that he doesn’t share these values. His comments were disturbing and representative of a bigger issue Congressman Cramer has with respecting women and victims of assault or abuse.

“Regardless of one’s opinion on the Supreme Court nominee, allegations of sexual assault should never be trivialized or diminished – as Congressman Cramer did yesterday.

“It’s unfortunate that this even needs to be said, but clearly it does – sexual assault is never OK. Never. Congressman Cramer owes North Dakotans answers and he owes survivors of sexual assault an apology.”

The same month Planned Parenthood protestors attempted to deliver a petition to him at his Fargo’s office at 3217 Fiechtner Drive, and Cramer used Fargo Police to turn away the women because he didn’t want protestors inside his office.

Three months later he continued his pattern of disrespecting women when he called Mika Brzezinski, co-host of “Morning Joe” on MSNBC a “snob.”

Earlier this year Cramer praised Will Gardner, the Peeping Tom running for Secretary of State as “a very good man,” and a gentleman, even after evidence came forward that he was caught prowling outside a women’s dormitory at North Dakota State University with his pants unzipped, shirt undone, and belt left in his car in 2006.

Defending Gardner, Cramer continued his defense of Gardner by saying he had been redeemed, and that the evidence against him shouldn’t be a “compelling case” not to vote for him.

In June this year, shortly after Cramer announced he was vacating his seat in the U.S. Congress for the U.S. Senate, said President Donald Trump was treating Heitkamp kindly because she was a woman.

“I do think there’s a little difference in that she’s a woman,” Cramer told the Washington Post. That’s probably part of it, that she’s a, you know, a female. He doesn’t want to be that aggressive, maybe. I don’t know.”

His statement then raised questions of why wasn’t Trump more “kindly” toward Clinton during the 2016 Presidential race.

Cramer, who accepted the endorsement of the Public Advocate of the United States on May 20, labeled an extremist hate group peddling in conspiracy theories, and has never disavowed the endorsement of the state’s Nationalist Socialist Movement unit leader, attacked and threatened Native women during a meeting over the Violence Against Women Reauthorization Act of 2013.

Director of Spirit Lake Victim’s Assistance, Melissa Merrick, works to end violence against women, and after the attacks said that Cramer is the “epitome of white male privilege.”

Cramer repeatedly interrupted her and others during the meeting, saying tribal governments are dysfunctional, but never clarifying why he believed they may be dysfunctional. He also stated that he wanted to “ring the Tribal council’s neck and slam them against the wall,” according to Merrick.

“As a non-Native man, I do not feel secure stepping onto the reservation now,” Cramer said, according to Merrick.

“Why? What are you going to do?” Merrick said. “Don’t beat up our women and you will be fine.”

“Not that’s not it,” Cramer responded. “You can’t tell me I will get a fair trial.”

“All you have to do is act right and you have nothing to worry about,” Merrick said.

During the verbal attacks, it became clear to Merrick that Cramer was protecting non-Native perpetrators of crime while on the reservation, and that he believed the federal government would do a better job than the tribes were. Toward the end of the meeting, Cramer said that protections listed within the Violence Against Women Reauthorization Act were “unconstitutional.”

“He did not come to the meeting with the intention to listen,” Merrick said. “He came with his own agenda. He made threats of violence towards my Tribal leaders, spoke of how dysfunctional our people are, and focused on how unfair the Tribal Court system would treat a non-Native offender. This man represents North Dakota on a national level. There are five reservations in North Dakota. From the way he spoke, he cares nothing of them, and in fact seems to think we are beneath him.”

In a strange twist, Cramer’s office has ignored repeated attempts by the High Plains Reader to clarify his relationship with Betty Joe Krenz, a Woodworth woman who was arrested in relation to charges she orchestrated the fake adoption of Native children, and yet was featured in a Cramer political ad in 2014.

Cramer is vacating the state’s only Congressional seat, and state Senator Kelly Armstrong, who was convicted of a DUI in Virginia in 2001, is running against Democrat Mac Schneider for the U.S. Congress.