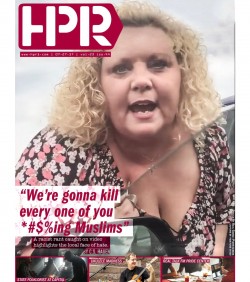 “People look at us differently,” Soyan said a day after she was approached by a white woman from Mapleton in the Walmart parking lot. The car she was riding in parked a little close to a blue Honda, and the owner wasn’t happy.

Since Rowda Soyan’s arrival in Fargo nearly five years ago, she’s dealt with racism on a semi-daily basis. No one, however, has threatened to kill her or all Muslims just because she wears a hijab. “It makes us feel unsafe, as if we aren’t humans.”

“Our parents are afraid,” Soyan said. “But we’re trying to stick up for everyone. This time, this is it.”

The woman who threatened Soyan identified herself in a Facebook apology post late Tuesday night as Amber Elizabeth Hensley, and worked as a secretary at Horab & Wentz, CPA until after the incident. Her employer said he received hundreds of calls and hundreds of emails from across the nation Wednesday morning, and that Hensley had been fired.

“Horab & Wentz does not agree with or support the statements expressed by Amber Hensley in the recently posted video,” a company press release stated. “She does not represent or reflect the views of Horab & Wentz. Ms. Hensley is no longer employed with Horab & Wentz effective immediately.”

In her public apology, Hensley declared herself a Christian, and that one of the three women cursed Jesus after Hensley asked them about religious issues during the incident.

“She had parked way too close to my car and I couldn’t get in, when I asked her to move she refused, I asked her again and she swore at me, calling me a fat bitch,” Hensley said. “To that, I informed her that I was a Christian, and asked her if she knew who Jesus was. She said ‘Fuck Jesus,’ and I lost it.”

Sarah Hassan, Soyan’s friend, was in the car and filmed the incident, and said at first the woman approached them to say they parked too close, but the conversation took a quick turn when she began talking about her sister’s eyes. Her sister, Laleyla, was driving. Sarah used 15-second WeChat video recordings to film the woman’s tirade.

The incident attracted dozens of onlookers, none of whom lifted a finger to help, Soyan said. All three women were wearing their hijabs, preparing to enjoy an afternoon off from work when the incident occurred.

“No one stood up for us, nobody even said a word, it was a scary moment for all of us,” Soyan said. “People need to take this seriously. Someone could die.”

The women, all originally from Somalia, couldn’t sleep last night, and haven’t eaten since, they said, and several of them have lingering headaches and shaky hands from the verbal confrontation. When they heard news the woman who threatened them had lost her job, they shook their heads.

“No one was trying to get her fired,” Soyan said. “It was awful bad when I heard that.”

“If she tells the whole truth, we will forgive her,” Leyla said.

Despite dealing with racism on nearly a daily basis, all three women do not plan to leave Fargo, not yet. “Everyone is telling us we should leave the state now,” Soyan said. “My parents are worried, but where are we going to go?”

So far this year, five cases of hate crime have occurred, Abdullahi said. A woman wearing a hijab at Hornbachers in Moorhead was verbally assaulted; an assault that occurred while an immigrant was moving into a new apartment in Fargo; two other incidents, one involving Soyan’s car and a can of spray paint, and then Tuesday’s verbal assault.

“North Dakota has the highest per capita hate crime rate in the nation, second only to Massachusetts,” Barry Nelson, of the North Dakota Human Rights Commission, said during a meeting on the topic of hate crimes earlier this year. Minnesota has hate crime laws; North Dakota does not, he said.

The issue, Nelson said, is not with police, but with the state legislature’s refusal to change the law to include the definition of hate crime.

“Hate crime is a very difficult thing because you have to get inside the mind of the person who committed the act,” Fargo Police Cultural Liaison Officer Vince Kempf said.

A hate crime nearly took Makruun Hagar’s nose off in 2014, he said. Originally from Somalia, Hagar is a taxi driver, and after he attempted to stop a domestic dispute, the assailant, Dominique Martinez, punched him, then bit his nose. Hagar had three surgeries, and spent eight months trying to fix the damage, but he is still on medication, and can’t breathe properly during the colder winter months, he said.

He keeps the bloody T-shirt as a reminder to himself and to his five children, ages one to eight, that racism in Fargo is a real threat, and that hate crimes can have real, financial, and physical repercussions.

“Every day when I pick up people, sometimes they ask me about my religion, and then ask if I am a terrorist,” Hagar said. “If I was white and if someone bit my nose, the community would help.”

But Hagar is black. A dark skin graft is still visible on his nose from where he was bitten.

“He brought a lot of problems for me and my family,” Hagar said.

Cultural training is needed, said Abdullahi of the Fargo Islamic Center.. Moorhead officials, the mayor, the police chief helped Abdullahi and victims earlier this year when a hate crime was committed. In Fargo, the response is different, he said. The three women who were attacked Tuesday agreed, saying the reactions of people in Fargo compared to across the Red River in Moorhead are astonishingly different.

The best tactic to stop a hate crime, is to let the aggressor know you will not allow the hate to continue, Abdullahi said.

“If you stand with us, be a witness, and say I’m here with you and say, ‘Hey, stop this thing, this is Fargo,” Abdullahi said. “We don’t want to escalate the issue.”

The incident sparked widespread criticism online, with few defenders. Shaun King, senior justice writer for the New York Daily News, posted video of the incident, which had more than 113,000 hits in less than 12 hours.

By 9:30 Wednesday morning, Hensley had taken down her Facebook profile.

Most of the comments online showed disgust. Some defended the woman’s actions online, which quickly became arguments.

“Can’t believe that you are so ignorant that you can not see why people would be forced to act like this, look around, attacks on Christians, everything American is offensive to immigrants (so why did you come?” college students are brainwashed to believe socialism is perfect,” a man named Ricky Jordan, from Texas, said.

“You were born with being politically correct has made human[s] weak, ready for complete control by the few powerful. Oh, wait, that would be the biggest form of slavery in the history of humans.”

“It’s hard to believe that this stuff happens in Fargo,” Dave Lanpher, from Fargo, said. “So much of what we have is the beautiful intersection of differences that can make a stronger community. The courage to stand up to racial bigotry is extraordinary, and I applaud them.”

“She’s disgusting, and anyone walking by that and not stopping to help those three women should be ashamed,” Ellen Becker said.

“Sickening that this type of behavior happens in our state,” Jon Starkey, of Napoleon, said. “Trump’s America.”

“You threatened to kill them, you terrorized them,” Martha Dille, of Moorhead, said. “You were saying what you really believe. Lots of people have bad days, but would never attack innocent people.”

“First of all we never say F*ck Jesus, because we Muslims believe in him as a prophet, a messenger of God, and that one day he will be back, so don’t be telling me no Muslim lady said that.” Kica Take Shahida, originally from Iraq, said.

“In case there are any doubts, I am not a nice guy,” Tom Asbridge, a retired rancher who ran for the North Dakota House of Representatives last year, said. “If humiliation for this type of behavior works, it will be done. No excuses. No level of tolerance on this subject today. This is not 117. It is not okay. Stand up.”

Dozens of commentators said that if they had been at the scene, they would have stopped the woman.