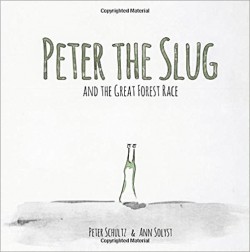 A little over three weeks ago, local author Peter Schultz released his first children’s book, “Peter the Slug and the Great Forest Race,” illustrated by his friend and colleague Ann Solyst and published by his own independent company, Silver Goat Media.

The book centers on a slug named Peter who dreams of running in the Great Forest Race. But, he is discouraged by the other animals from participating, because, as they tell him, “Slugs always finish last.” The story provides a lesson in courage, perseverance and following one’s dreams in the face of adversity.

For Schultz, printing it himself was an easy decision to make.

“We never even considered selling it to a regular press,” he said. “I wrote another book in 2012 -- a textbook on Modern Greek -- and I gave it to Cambridge University Press because they wanted it, and they said they’d charge $39.00 for it. And this book was only about 70 pages, so I said, ‘Forget it. I want to do it myself.’ Now I sell it for $9.00. We did it completely on our own. And the students win -- they save about 70 percent of what the traditional publisher wanted to do, and I get more royalties, and the book looks every bit as perfect as you could ever ask for. We’ve got a great team of designers. I don’t think I could ever work with traditional publishing again, honestly.”

Rather than turning a profit with an overpriced textbook, Schultz dedicates himself to producing quality work and making it accessible to young people, as well as raising money for the wildlife conservation efforts of the Longspur Prairie Fund, which he manages.

Of his publishing team, Schultz said, “We’ve got some of the best designers around, and some fantastic copy editors. All we care about is working with awesome people who have stories to tell. I think that’s what it should be about. Publishers don’t see it like that, though. I know because I’ve been in the industry about 25 years. What they see is, ‘How can I make money off this?’ and that’s the end of it. And look, I’ve got nothing against profit, but I think the capital should go to the people that make the content, not the people who own the presses and the giant media machine.”

“Peter the Slug” took several years to finish, partly due to the length of time it took for Schultz to find the right illustrator.

“That was an arduous process. I actually wrote the draft of the story seven years ago, and I immediately went to a friend of mine who was an illustrator, and he made some rough sketches of the project. I don’t think neither he nor I were entirely satisfied with how they looked, so we put it on hold for a bit. Then I had another friend of mine do some illustrations years later, and again, I really didn’t like it. And then I sat down with my friend Ann Solyst, and she did a couple of illustrations. I loved them, they were absolutely perfect, and we spent the next year and a half working on it.”

Though “Peter the Slug” is making its rounds worldwide, with translations in German, Danish, Swedish, Icelandic, Portuguese and Spanish, to name a few, Schultz takes great pride in the fact that it’s entirely a Fargo product, made possible by the collective efforts of local artists. It has even been turned into a short YouTube movie by the local cinematic production company Grassfire Storytellers.

“We had local filmmakers, voice talent, editors, sound technicians, musicians -- it really is a made-in-Fargo kind of thing,” Schultz said. “And they did a great job. Every time I watch it, I’m like, wow, it looks so great, it’s professional, the voice acting is fantastic and the sound is just amazing.”

Currently the book can only be bought online, as Schultz and company are still searching local bookstores and libraries for the right venue.

As for future projects, Schultz and Solyst are currently working on a picture book about a hedgehog named Daisy, along with a card game based on “Peter the Slug,” which aims to teach children the basics of numbers, literacy and math.