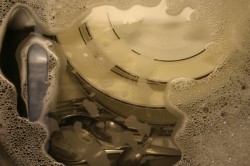 My friend Emily recently checked into a hotel for the night and was just about to crawl into bed when she peeled back the bedspread to reveal a half-eaten piece of pie. The scene was complete with linen napkin, plate and fork, as if the duvet, enjoying a private dinner, had been suddenly interrupted in the middle of the dessert course.

When I tell this story, invariably the first thing people ask is, “What kind of pie was it?” as if that would make any difference. Apple pie is the least threatening of all baked goods, as everyone knows. And lemon merengue, along with the custard-based pies, just can’t be taken seriously. But strawberry-rhubarb would be the epicurean equivalent of finding a horse’s head under the covers.

To the best of my knowledge, the latest edition of the Diagnostic and Statistical Manual of Mental Disorders (DSM) doesn't include “Neat Freak” as a recognized psychiatric condition, but if it did, I’m certain that my photo would be attached. I admit that I love to see the vacuum cleaner lines in a freshly-Hoovered carpet, to smell clean sheets waving in the outdoors, or to hear the comforting hum of a full dishwasher (properly loaded with the silverware pointing handles up, of course).

For me, cleaning is stress reduction, a way of coping with feelings of anxiety and uncertainty. And more than that, cleanliness is like a basic need, something that must be accomplished before I can move on to other things: I just can’t think straight if my surroundings are in disarray.

The founder of Humanistic Psychology, Abraham Maslow, famously proposed a hierarchy of needs that emphasized how human beings strive to reach their potential by meeting certain needs. Described as a pyramid shape, Maslow’s hierarchy contains five levels from the most basic physiological needs at the bottom (e.g., food), to the need for safety, love, self-esteem and personal growth.

According to Maslow, you must satisfy the needs at the base of the pyramid before you can hope to tackle the top. It’s not unlike that other famous pyramid in our collective consciousness: the food guide pyramid. If you want to reach the sweets at the top, you have to first finish your fruits and vegetables (or in the Pink Floyd version, “How can you  have any pudding if you don't eat yer meat?”).

When it comes to the need for cleanliness, my friend Emily is pretty easygoing. Following the pie-discovery she called down to the front desk for another room, “Or at the very least some ice cream to go with this pie,” she suggested. But the hotel was booked and as it was late, there was no cleaning staff to change out the sheets. The night manager suggested that since it was a double room, she should simply sleep in the other bed, which she did (did I mention that Emily was easygoing?). I don't even like to sleep with a dirty dish downstairs in the kitchen, much less in arms-reach of hotel-bed pie.

Whether the clutter is mental or material, I don't let things “pile up.” I can attest to the accuracy of this image as my roommate in college left her laundry for so long that it actually created a pile high enough for her to reach the top bunk. My kids haven’t yet learned this lesson, which explains the laundry I discovered stuffed into the back of the closet (as I tunneled through it I thought I glimpsed Narnia). Some clothes were packed so tightly into a laundry basket that they had formed a solid mass and I had to shake them out like canned cranberry jelly.

And so it’s important to lay down the rules: Any used cup, plate or spoon goes directly in the dishwasher. Items not immediately placed inside the dishwasher seem to scatter around it in ever-decreasing distances as if asymptotically approaching the dishwasher but never to intersect with it. This is the same force that keeps coats from being hung up in the closet and spreads shoes out in front of every doorway. It is like some Newtonian Law driving things towards inevitable housekeeping entropy. And like any set of opposing forces, this drives me to continue cleaning in order to satisfy my need for clutter-free clarity.

So if and when I finally reach the top of Maslow’s Pyramid, I will damn sure have the cleanest house in the neighborhood. And as for the food pyramid, you know what’s at the top of that, don’t you? Fats, oils and sweets. That’s right. Pie.