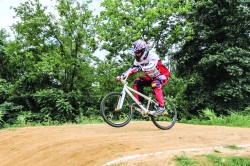 Besides its natural beauty, there is something perfect and primal about the woods. Many of us spent hours there as kids on our bikes, growing up, risking (and sustaining) injuries. It was a private world that generations of kids blazed through and wore down.

“When I was a kid, it was just us on our BMX bikes,” said Patrick Crary, a board member of Fargo-Moorhead Trailbuilders and a key personality who made the latest generation of dirt trails in Gooseberry Park possible. “We’d find a couple of jumps, and then over time, we'd just ride… and it became a trail. We had this thing called ‘The Double Bubble’ that a lot of people might remember. It was a series of jumps. If you jumped the first one right, you make it over the second one. If you didn't do it right, you'd end up in a heap.”

Today the dirt trails in Fargo-Moorhead are better than ever, thanks to the Fargo-Moorhead Trailbuilders. Step beneath the leafy canopies of MB Johnson Park or Gooseberry Park, and you’ll find proper dirt trails, with markers and topography that sheds excess water. “It started with MB Johnson trails in North Moorhead maybe six or seven years ago,” said Crary. “Gooseberry was started unofficially about three years ago. I saw what they were doing at MB Johnson Park, and with permission from Trailbuilders and Moorhead Parks I started on Gooseberry.”

Today, thanks to the tireless efforts of the Trailbuilders, along with the support and partnership of Moorhead Parks, the city has a surprising variety of fun, challenging mountain bike trails. All you have to do is step off the road and take a look in the woods.

“When we were kids, it was fun because we had nothing to compare it to,” said Crary. “But now it's way better because we have some thought and creativity in there.”

If you haven’t had a chance to go back to the shady, wooded dirt trails of Moorhead Parks, the latest cycling event held by the Fargo-Moorhead Trailbuilders presents a great opportunity. The Trailbuilders have been promoting its Flugly Mountain Bike Race for years (Flugly stands for “flat and ugly,” by the way). The group, made up of a dedicated group of mountain bike enthusiasts, have been doing a lot of good work, adding a bit of terrain to the flattest geography in the upper-Midwest. The Trailbuilders’ latest event, the Wild Goose Chase Mountain Bike Race, is happening this Sunday. It’s not just the first cycling event to be in Gooseberry Park, it’s the first endurance race held by the Trailbuilders.

“Endurance mountain biking is where you go for a really long time and you need to eat… you need to train,” said Crary. “It's like running a marathon on a bike, really. The people who do the 10-lap race, most of those people will be really struggling by the 10th lap.”

The trail is primarily single track, with "short punchy climbs." The Trailbuilders also boast "flowy pump sections" (where you use your body and the terrain to maintain and generate speed) plus "banked corners and tacky soil" that, altogether, promise a fast ride.

“The track is pretty massive,” Crary explains. “It's about a 3.5 mile loop... it's like a big Mario Kart race track.”

Mountain bikers of all levels can test their skill and endurance with both five and 10 lap options. Helmets are mandatory. Effort is optional. First-timers or casual bikers can register for a single-lap, four-mile race. Kids can even get in on the action with a single-lap, three-mile modified race.

“You're never going to run into somebody head on,” said Crary. “In the race, we use pylons, barricades, etc., so the first-time rider doesn't have a hard time figuring out how to get around.”

If you just want to be a spectator, Crary says there will be plenty of good places to watch the race. “If you want to see some action, we will have a lot of it. There will be some really good spectator spots to see the bikers. If you're aware of where the racers are riding, you can go into the woods and check it out as well… We just don't want anyone on the track.”

Crary will be there as a master of ceremonies, spinning records and providing commentary on the microphone.

“I’m just looking forward to seeing people have a blast riding something that I had a big part in building,” said Crary.

Entry fees are $25 for adults ($20 online) and $15 for kids under 12 ($10 online). All entry fees benefit Fargo-Moorhead Trailbuilders activities, such as trail development and other events.