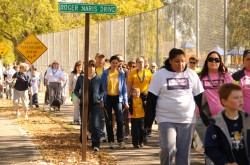 Nine years ago, the Weilers, of Fargo, lost one of their family members to suicide during a time when even saying the word “suicide” was difficult for people in the community.

As one of the organizers of today’s most well attended suicide walk in North Dakota, Out of The Darkness, Brenda Weiler, nine years ago, had difficulty even approaching the media for coverage when it first started.

Today, talking about suicide is met with much less resistance, and Brenda said that’s a small yet huge part of how we as a community can help lower the rate of suicide in the state and in the country.

“I think that whole community aspect is what I have always found really important and I think that the walks are sort of the symbol of that because it’s a huge mass of people coming together, supporting each other,” Brenda said. “It’s really palpable when you are at that event -- how important it is.”

American Foundation for Suicide Prevention’s Out of The Darkness Walk, taking place in Fargo this Sunday, Sept. 21, works to helps combat the high rates, the stigmas and the grief of suicide though community. According to the AFSP, we lose more than 38,000 to suicide in the U.S. every year. Also, around 700,000 people make a suicide attempt requiring medical care every year.

AFSP is the largest nonprofit dedicated to suicide prevention in the U.S. Brenda said it’s also perhaps the most diligent, research and evidence-based organization that helps communities all across the country get help and access to support groups, help lines and education.

“When we lost my sister, I really felt like there was a huge void for families to deal with that kind of a loss,” Brenda said. “Because it is really traumatic and it has a ripple effect through families and through communities that I don’t think people really understand fully until they are going through it.”

So every year for the past nine years, the Weiler family has organized an Out of the Darkness Walk in Fargo to help other people in community who’ve struggled with suicide loss or even thoughts of suicide.

Today, there are now seven AFSP walks across North Dakota that have been raising hundreds of thousands of dollars for suicide research, prevention, support groups and education.

“We now have a teen group, we have an adult group, we have a Hispanic or Spanish speaking group; and we have a survivor outreach program that actually brings survivors into homes of people who have recently lost so you get that one on one connection with another survivor as soon as you want,” Brenda said.

The event on Sunday includes a walk around Lindenwood Park, where people will be able to wear different colored beads symbolizing who the may have lost. For example, the color orange may symbolize that someone’s lost a sibling. The color blue, symbolizes those who are supporters of the cause.

“It’s pretty amazing when you are at the walk and you see people who have four or five different colors on because they’ve lost a grandfather, sister and friend, a coworker or husband,” Brenda said.

The walk also includes resource tables, speakers and an open mic that allows anyone to go up and share stories.

“It can get fairly emotional for a lot of people, but sometimes it’s actually really joyful,” Brenda said. “People share stories and last year a little girl did a dance for her sister. It was really amazing.”