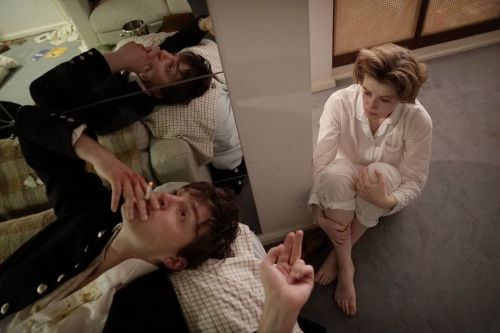 A carefully crafted and intensely observant fictionalization of writer-director Joanna Hogg’s experiences once upon a time in film school in the early 1980s, “The Souvenir” is essential viewing for devoted cinephiles. Semi-autobiography may be an appropriate descriptor for the movie, but “The Souvenir,” which collected the World Cinema Dramatic Prize at the 2019 Sundance Film Festival, should not be confined to a lone category like memoir. Hogg’s wide embrace folds around the frequently considered ideas of the artist’s journey, but “The Souvenir” also explores the emotional maturation of a young woman in a difficult romantic relationship with a high-functioning addict.

Hogg’s onscreen proxy Julie is portrayed by Honor Swinton Byrne in her first featured role -- and it’s a memorable, breakout performance. Julie’s affluence, privilege, and comfort is represented in several ways but principally communicated in brief scenes in which she taps her mother Rosalind (Tilda Swinton, real life mom of Swinton Byrne and a longtime friend of the director) for cash infusions that more often than not fund older boyfriend Anthony’s (Tom Burke) habits as much as the movie gear, film stock, and other school-related expenses Julie needs to pursue her evolving moviemaking vision.

Hogg appreciates subtlety, and one of the great joys of “The Souvenir” is the way in which the viewer is invited to participate in the small intimacies experienced by Julie. The result is that we feel our way through the narrative alongside the protagonist, discovering the good and the not so good in concert with her. This technique of hiding all kinds of valuable information in plain sight -- but just a bit left of center or in the background -- can feel like the most empowering kind of storytelling for those comfortable with the nuance and ambiguity of an open-ended text.

The restraint with which Hogg conducts the proceedings may turn off viewers accustomed to the blunt, direct streamlining of plot beats in most films, but there’s no denying that the director’s orientation toward the discovery of transcendent moments within the quotidian aligns with Robert Bresson’s respect for quietude, stillness, and introspection. That said, “The Souvenir” breathes and behaves cinematically. It is far from just pictures of people talking. The spaces between the dialogue, when the violence of political strife or the attitudes of professors and fellow students may be inferred, draw us in.

As a particular kind of bildungsroman, “The Souvenir” is also supremely sensual. Hogg’s stylish sojourn to Venice is tactile in its eroticism, even as we know the toxic mismatch of Julie and Anthony will inevitably lead to one heartbreak or another. The filmmaker dramatizes concrete components of the heroine’s progress, especially when they come with a steep cost, and the result is that we stretch and grow along with Julie. Additionally, Hogg shot in sequence, with much improvisation, including but not limited to work on a carefully constructed apartment set. Cinematographer David Raedecker captured images on digital and motion picture stocks to get specific textures and grain. Admirers of “The Souvenir” may continue their celebrations. A sequel is currently in production.