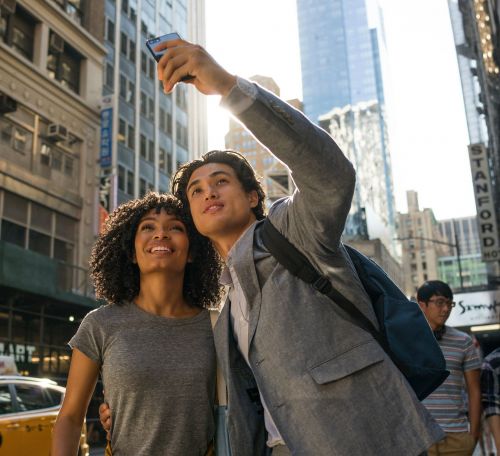 Impossibly beautiful lead performers underline the YA fantasy aspects of Ry Russo-Young’s translation of “The Sun Is Also a Star,” based on Nicola Yoon’s bestseller. Russo-Young’s sharp handling of the 2017 adaptation of “Before I Fall” indicates her bona fides in the contemporary teen genre, but the filmmaker struggles to locate the intensity and urgency that fueled her previous feature, despite a plot with a built-in imperative. As star-crossed (potential) lovers cramming a whirlwind courtship into the fleeting hours remaining on a ticking clock, Yara Shahidi and Charles Melton don’t generate the necessary heat to make enough audience members -- of any generation -- swoon.

Throughout the film, and despite numerous attempts to convince us of their against-all-odds compatibility, Shahidi and Melton remain curiously closed off from one another. Both performers are blessed with the physical countenances of catwalk supermodels, but that elusive X-factor Melton’s character Daniel Bae insists is present never shows up for the eager viewer. Daniel, a poet at heart, is the son of South Korean immigrants who expect him to attend Dartmouth to study medicine. Shahidi’s Natasha Kingsley is a Jamaican-born high school student whose residency in New York City is about to end with the deportation of her whole family.

While her parents are resigned to their cruel fate, Natasha chooses to spend her last day in America pursuing last ditch legal efforts to postpone the departure. En route to a meeting with an immigration attorney, a distracted Natasha’s life is saved by Daniel. Daniel, who had been following Natasha since he spotted her satin “Deus Ex Machina” jacket in Grand Central Station, is instantly transformed from pursuer/stalker into guardian angel. He thinks he can convince Natasha to fall in love with him via the set of 36 questions referred to in Mandy Len Catron’s essay “To Fall in Love with Anyone, Do This.”

As a slice of daydream make-believe, we aren’t supposed to scrutinize the nuts and bolts of Natasha’s catastrophic predicament too closely, but it’s certainly a stretch to suspend disbelief enough to accept the series of cute interludes, from Daniel’s coffee shop love pitch to a sultry karaoke rendition of “Crimson and Clover” to a stargazing show at the Hayden Planetarium. Wouldn’t Natasha be more consumed by her overwhelming family crisis? Is she already packed? Strangely, the distractions become the principal spectacle, and “The Sun Is Also a Star” ignores the timely politics of the Trump administration’s draconian and xenophobic orientation to border security and the undocumented.

The movie also misses the mark as an exemplar of the teen film simply because too many hallmarks of the genre are absent. Both “kids” are presented as high school students (Shahidi is currently 19, Melton is currently 28), but their maturity, poise, and independence are more typical of narratives featuring college-age or post-undergraduate characters. Despite entertaining directorial flourishes often accompanied by striking stock footage cutaways -- from Carl Sagan to a history lesson on African American hair care products -- Russo-Young can’t set her hooks into much beyond the postcard images of the Big Apple.