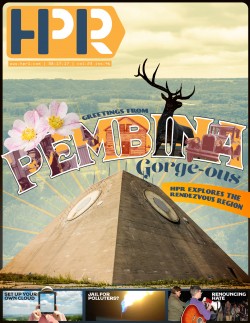 The Red River Oxcart was constructed entirely of wood and was used by the French fur traders and the Metis from 1800-1870. Incredibly enough, some of their wheel marks are still visible after all these years. The heavily wooded hills and valleys of the Pembina Gorge are alive with history and the folk histories of their inhabitants.

It is said that the squealing ungreased axles could be heard for miles. A replica of one of the carts is on display at the Pembina County Historical museum, created from the plans of the original sent from The Smithsonian. That along with traditional Icelandic costumes lovingly embroidered with silver thread mildly tarnished with age -- which was only a taste of the deep-rooted connection with the area and its deep-rooted connection to its Icelandic heritage.

When HPR traveled to the Pembina Gorge, the only similarity in our transportation was the lack of air conditioning in my Honda. I took the backroads on my way there from Jamestown and wound up underestimating my time of arrival. 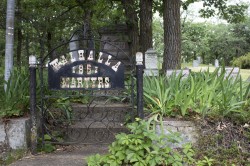 Though I resisted the urge to explore many a prairie graveyard along the way, I did come across a unique monument roadside at the Thingvalla cemetery a couple miles outside of Mountain. The monument was dedicated to K.N. Julius, an Icelandic poet known for his satire. Groundskeeper Leslie Geir said, “We have five or six tour groups from Iceland come through each year. They read several of his poems and pour a little bit of Brennivín (Icelandic schnapps) to toast him.”

Once we arrived in Walhalla we checked into the Sanctuary Guest House. The Sanctuary is a breathtaking Victorian era mansion, complete with Corinthian columns and a beautifully landscaped garden. The interior is full of antique hardwoods mixed with exotic and eclectic decor. Our breakfast, served by our hostess Deidra, was as divine as our beautiful surroundings.

The fur trade drew the European settlers into what is now North Dakota, and this is why the northeast corner of our state is referred to as the Rendezvous region. A Rendezvous was an annual meeting among trappers and mountain men in which they would sell their furs and replenish their supplies. 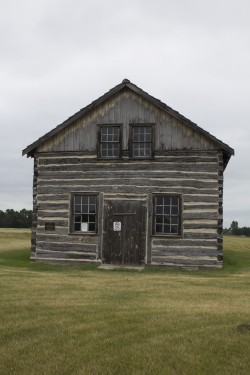 According to Walhalla’s website the Kittson trading post was built in 1843 and the Gingras trading post in 1844.The Gingras served the Metis community. The Metis were the offspring of French or British traders and Native women (mostly Chippewa). They retained elements of both cultures and were known for their colorful clothing. Their language consisted consisted of both French and the language of their mothers. Unfortunately, the Metis were outsiders in both the European and Native cultures.

Metis trader Antoine Gingras had a trading post on the outskirts of what is now Walhalla. Fully restored, the trading post and his home were once open to visitors. Unfortunately the State Historical Society had to temporarily close the doors to the Gingras site due to lack of funding, though there were plaques surrounding the structures explaining the site’s historical significance.

Louis Riel, the Metis leader who was instrumental in Manitoba becoming a province, was also a resistance leader who fought the Canadian Government in an effort to preserve Metis lands, and once sought refuge in Gingras’s attic. Riel was eventually hung for treason in the 1880s.

Another spot that lends insight into Walhalla’s history is the Martyr burial site. The site of the cemetery itself lies on a hillside dotted with oak trees within Walhalla city limits. The martyrs’ graves have their own small section and are protected by an iron gate. The iron script on the gate reads, “Walhalla Martyrs 1852.”

They were Baptist missionaries looking to convert the natives to Christianity. "Mrs. Cornelia Leonard Spencer," reads one inscription. "Killed by Indians August 30, 1854 at Walhalla, where she and her husband were laboring as missionaries." The Pembina County Museum is also known to do cemetery walks on occasion.

Interestingly enough, Billy Buttons, one of the early minister’s horses, is buried outside the gates of the cemetery. The minister insisted that Billy be buried with him but it was frowned upon that animals (other than humans) be buried in the graveyard.

Though my tour of the trading post and the cemeteries was brief, I returned to walk around and shoot some photos; and even encountered a number of deer. 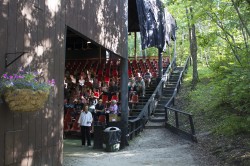 Race Heitkamp and I eventually got together and met our contacts in Langdon. Here we explored the town during a small festival, caught a car show and had a chance to walk through the Roxy, their renovated Main Street theatre.

NDSU Extension Research Center Director Randy Mehlhoff gave us a brief tour of their test plots in Langdon. Here we saw a few varieties of flax, barley and industrial hemp.

And even gave us a bit of a 101 on the Canola crop. Did you know North Dakota is the number one producer of canola--and that canola oil is healthier and more affordable than olive oil?

We went on see the campsites and beach areas of Mt. Carmel Dam and then headed back to Walhalla on quiet back roads lined with seemingly endless bright yellow fields of canola. We had an engagement to see a play at Frost Fire Theatre.

Frost Fire’s entire property encompasses 172.75 acres and there is no shortage of summer and winter activities, whether you ski or snowboard or prefer to ride your ATV or bicycle through the beautiful trails.

They also have a summer theatre program complete with a beautiful outdoor theatre. If you arrive early they have a buffet set up and a variety of shops with handmade goods on the grounds.

Dick and Judith Johnson opened Frost Fire in 1976 with the intention of developing the area for recreation and commerce, but wanted to preserve the natural wonder of the area. The lodge itself is a log building with cozy fireplaces and rosemaled accents--an appropriate nod to the area’s Scandinavian heritage.

The production this year was “Smoke on the Mountain.” The play takes place in a Baptist church in depression era North Carolina and follows the shenanigans of a gospel singing family taking over the pulpit. The soundtrack consists of traditional gospel hymns and a bluegrass sound. 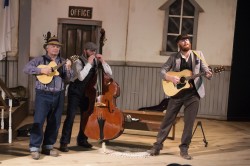 After an action-packed day of exploring, I had every intention of checking out the nightlife in Walhalla but the sanctuary of the Sanctuary took me in and I didn’t leave my cozy queen size bed until morning; and figured a night of revelry would only make my action-packed Sunday and non-air conditioned ride home a little less enjoyable.

We started our Sunday out exploring Icelandic State Park. The land secured for the area was donated by G.B. Gunnlaugson in 1964. He was the son of Icelandic farmers, a conservationist, and then later an engineer for Case IH Ag and Farm Equipment. He described the area as “The rim of the wilderness, beautiful and inspiring.” The area encompasses untouched prairie and hosts a variety of flora and fauna that wouldn’t be found anywhere else nearby if it weren’t for his conservation efforts.

Part of the park hosts a variety of buildings from pioneer days, including a log cabin, farmstead, church, school, and even a beautifully preserved hall complete with hand-lettered advertising of its sponsors from years ago.

Events are still held in the hall whether it be Saturday night in the hall events or rented out for private parties. The park also features a beautiful campground and plenty of opportunities for hiking and water sports.

We then went on to the Pembina County Museum. They have three buildings of fully restored farm equipment, the largest library of Icelandic books in the U.S., and a rare Case Model X, a coupe that is the last of its kind and once belonged to G.B. Gunnlaugson. 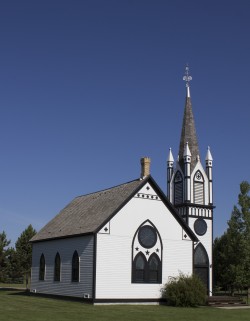 The last leg of our rendezvous in the Rendezvous region led us to The Walsh County Historical Society in Minto. During our 48 hour whirlwind it was hard to choose a highlight but this museum was one. Housed in the old school, the Walsh County Historical Society was full of history and aimed to engage museum goers with scavenger hunts for the kids and a History Alive event where volunteers relive history, whether they serve non-alcoholic beer in the bar or ice cream in the soda shop.

Displays include Native American artifacts, pioneer life, fossils, wildlife specimen, vehicles, military memorabilia, and so much more. It’s clear that the men and the women in the area are intent on keeping their history intact with beautifully maintained displays and passionate volunteers.

G.B. Gunnlaugson once said, “This is your heritage, you can let it be forgotten or you can make it live on to inspire future generations throughout North America.” We think he’d be proud.