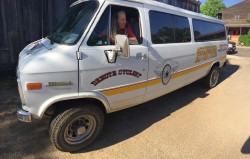 It was my last night in Medora and I was busy researching the Petrified Forest Loop I planned to hike in the morning. Earlier that day, Dakota Cyclery had dropped off myself and another rider, Paul, on the Maah Daah Hey trail.

We rode rode over twenty miles through the rough terrain of the North Dakota's badlands and opted to take the long way home, by crossing the Little Missouri river at Sully Creek State Park, which landed my 650lb Cannondale Habit above my head instead of between my legs.

I didn't want the boys from Paramount Sports in Fargo, who'd supplied me with the bike, haggling me for getting water in their hubs and bottom bracket.

I had some experience hiking in buttes similar to those north of Medora, but I'd be hiking alone, so I couldn’t afford any mistakes and had little interest in seeing any bison or rattle snakes in the flesh. Starting early meant cooler temperatures, lowering my risk of heat exhaustion and running into venomous snakes. Starting at sunrise would be my best bet. I'd wake up early the next morning and hit the trail.

Nerves and excitement prevented me from sleeping through the night and I awoke hours before my 6am alarm. My mind grew increasingly restless and there was no sense in continuing to fight it. I was already wide awake, I might as well pack up and head out early.

Driving to the trailhead was relatively easy with the use of the park map I'd been provided and local road signs. However, the signage does seem to slowly decrease in size the closer you get to the trailhead, transitioning from large, brown, traditional metal road signs to much smaller trail markers that were difficult to see in the early morning hours. All fuss aside, I was parked at the trailhead in about twenty minutes.

I looked around. No snakes, no bison. The coast was clear, so I signed the check in book and started down the trail. 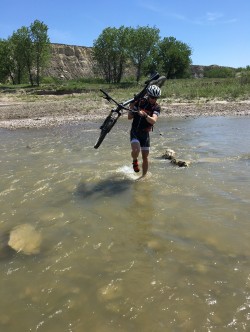 I was surprised how light it was for 6:30 in the morning but the days heat hadn't yet arrived, meaning I hopefully wouldn’t run into any rattlers sunning themselves on the trail.

I continued down the trail, scanning the horizon for any signs of wildlife when I saw a large brown hump on the prairie ahead of me. I squinted, trying to focus on the mound. "Could it be a bison?" I asked myself. My heart began to race as I slowly began to broadside the then seemingly harmless hump, which had now clearly come into view.

A two-thousand pound bull bison the size of a small pickup truck was lazily grazing on prairie grass, just fifty yards from the trail. Leaving early in the morning prevented me from encountering any snakes but it hadn't occurred to me that the largest land animals in North America prefer to eat in the cool of the morning before finding shade later in the day.

I kept my eye on the bull, who'd now become aware of my presence. Lifting his head but remaining where he was. I stayed on my path and he kept eating, crisis averted.

I knew, given my average pace, I could complete the trail just over three hours, giving me plenty of time to head back into Medora for an early lunch at the Maltese Burger joint I'd been craving, barring I didn't run into any more wildlife.

I rounded a corner, dropped into the buttes of the southern forest and almost immediately ran into another fuzzy pickup truck standing in the middle of the trail. I swore at myself for hiking alone, then at the bison for standing in my way. I'd have to wait out the bull, so I found a butte to hide on top of and kicked my feet up.

After twenty minutes of watching the bull walk up and down the trail I grew less intimidated and more impatient. It was already heating up and the rattlers I'd left early to avoid would soon be out and about. I needed the bull off the trail and out of my way.

I didn't know what to do, so I did as they'd taught me the night before at the infamous Medora Musical. I stood up and operatically sang about it. My voice echoed off the buttes and stone forest as I pleaded for the bull to "please leave me and the trail alone," and to "stop being so large and intimidating.” Much to my surprise, the bull agreed. He stepped off the trail and headed north.

Being back on the trail meant I could finally take care of business and make my way to the northern forest. Besides one more hiccup that landed me off the trail and in the middle of the prairie dog towns that surround the midpoint of the Big Plateau Trail (worth the extra miles if you're interested in these little guys!), I was admiring the root and nutrient transport systems of the fossils in the north forest just after 10am.

It had been a successful trip with a little excitement in between, but I had worked up an appetite. It was time to head back south to Medora and grab a burger.