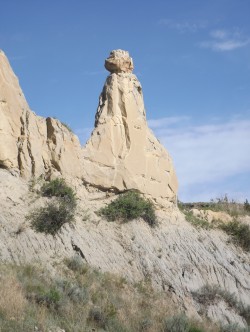 I’ve been a little cranky lately. Goofy elections, pipelines and oil refineries where they shouldn’t be, and oil and salt water spilling all over the place will do that.

When that happens, I try to go to the Bad Lands and refresh my soul. When I can’t go there, I read about them, and I write about them. I’ve been stuck at home lately doing fall chores, but I’ve been reading some of my favorite passages about our Bad Lands, and I think I’ll just share them with you. And then, as soon as I can, I’m going to go there. And not think about elections or oil spills or pipelines.

In the night, the Bad Lands had become the Good Lands

Here’s John Steinbeck, from ”Travels With Charlie”: “I was not prepared for the Bad Lands. They deserve this name. They are like the work of an evil child. Such a place the Fallen Angels might have built as a spite to Heaven, dry and sharp, desolate and dangerous, and for me filled with foreboding . . . And then the late afternoon changed everything. As the sun angled, the buttes and coulees, the cliffs and sculptured hills and ravines lost their burned and dreadful look and glowed with yellow and rich browns and a hundred variations of red and silver gray, all picked out by streaks of coal black.

“It was so beautiful that I stopped near a thicket of dwarfed and wind-warped cedars and junipers, and once stopped I was caught, trapped in color and dazzled by the clarity of the light. Against the descending sun the battlements were dark and clean-lined, while to the east, where the uninhibited light poured slantwise, the strange landscape shouted with color.

“And the night, far from being frightful, was lovely beyond thought, for the stars were close, and although there was no moon the starlight made a silver glow in the sky. The air cut the nostrils with dry frost. And for pure pleasure I collected a pile of dry dead cedar branches and built a small fire just to smell the perfume of the burning wood and to hear the excited crackle of the branches. My fire made a dome of yellow light over me, and nearby I heard a screech owl hunting and a barking of coyotes, not howling but the short chuckling bark of the dark of the moon. This is one of the few places I have ever seen where the night was friendlier than the day. And I can easily see how people are driven back to the Bad Lands . . . In the night the Bad Lands had become the Good Lands. I can’t explain it. That’s how it was.”

The Bad Lands are willfully coquettish

From Lewis Crawford, Former Superintendent of the State Historical Society of North Dakota, in his book Badlands and Broncho Trails, published in 1922:

“Size is only one element of grandeur. Beauty is usually made up of fine lines and rich colorings, and depends largely upon its transitoriness. It defies the camera. Beauty, whether in woman or nature, is never static. The camera always is. Mountains are too vast to get a close up view and too far away to give distinctiveness; they are grand, sublime, majestic, but are static, lifeless pictures unchanging through the ages, everlasting to everlasting. The Badlands are willfully coquettish. Mountains are the cold marble statues with unspeaking lips and unseeing eyes; the Badlands are the living actors with flushed faces, beaming countenances and pulsing blood. The sublimity of the mountains is awe-inspiring and reduces the beholder to nothingness, while that of the Badlands is palpitating, alluring, ecstatic; the one soul diminishing, the other soul accruing.”

A country of space and beauty and a sense of freedom

Olaus Murie, the great naturalist and “father of modern elk management” came to the Bad Lands in the 1950s, partly to make recommendations on the reintroduction of elk into what was then Theodore Roosevelt National Memorial Park. This description is from his handwritten report:

“Here is history! Our visitor looks across the badlands—the broken, tumbled Badlands—domes and bluffs and color-banded rims. Traces of lignite coal are there, speaking of ages still farther back in time. And the colored scoria, the product of native clay baked by burning coal seams. Traces of petrified forest. A landscape of clay and sandstone, persistently, patiently carved by muddy water, through infinite ages, until these rugged land forms took shape.

“I like to remember one evening on the rim of the deeply chiseled valley in the north area. We had been looking down on the winding course of the Little Missouri far below us, with its typical line of cottonwoods, and bordered by the typical Badlands formations. I had thought of those high school days in Minnesota, when I had borrowed Roosevelt’s books from the library. I remembered Frederic Remington’s drawings, remembered the burning desire to find this western scene. Will the people of today, the people of tomorrow, continue to feel the pull of land that beckons to a sample of our country as it was, a country of space and beauty and a sense of freedom?

“The sun went low and dusk was creeping over the valley below us. We watched that poetic quality of light envelop the cliffs and rims about us, and settle over the river bottom where we glimpsed the gleam of water in the bends.

“Not a serrated mountain range here, not a mossy forest, nor a lake-studded paradise. Rather an open country; its trees are twisted and storm worn, and grow sparingly along the river banks. A raw country, a country in the making, perhaps. This very fact, this character, the attributes of chiseled buttes and domes, the clay and the prairie grass, the eagle, the prairie dogs, deer, coyote; the flocks of grouse at the heads of the wooded draws—all of these spell one phase of our west—not to be compared with different ones—to be taken and enjoyed for its own singular beauty and character. Ordinary country, but with an aura of the west—something that drew Roosevelt, the adventurous ones.”

And the great Roosevelt himself wrote much about the Bad Lands, including this description of the Bad Lands in winter, written in his log cabin on the Littler Missouri River on a long, cold winter night, and published in his book Ranch Life and the Hunting Trail:

“When the days have dwindled to their shortest, and the nights seem never-ending, then all the great northern plains are changed into an abode of iron desolation. Sometimes furious gales blow out of the north, driving before them the clouds of blinding snowdust, wrapping the mantle of death round every unsheltered being that faces their unshackled anger. They roar in a thunderous bass as they sweep across the prairie or whirl through the naked canyons; they shiver the great brittle cottonwoods, and beneath their rough touch the icy limbs of the pines that cluster in the gorges sing like the chords of an AEolian harp.

“Again, in the coldest midwinter weather, not a breath of wind may stir; and then the still, merciless, terrible cold that broods over the earth like the shadow of silent death seems even more dreadful in its gloomy rigor than is the lawless madness of the storms. All the land is like granite; the great rivers stand still in their beds, as if turned to frosted steel. In the long nights there is no sound to break the lifeless silence. Under the ceaseless, shifting display of Northern Lights, or wintry brilliance of the stars, the snow-clad plains stretch out into dead and endless wastes of glimmering white.”’

I’m sharing these words, some of the best ever written about the Bad Lands, because when I try to describe them myself, I feel much like another North Dakota historian, Clell Gannon, who wrote, after a canoe trip on the Little Missouri River in the 1920s, “The view from the top overlooking a canyon-like reach of the Little Missouri was of the kind that gains little and suffers much from the inadequacy of a written description.”

Yes, the Bad Lands are hard to describe. The Bad Lands must be experienced to be appreciated. But they are threatened more and more by the advancing tide of oil drilling rigs and giant trucks and clouds of dust. How they survive this storm of oil development will depend on how much attention we pay to them, and how we rise to their defense. That’s why I keep writing about them.

[Editor’s note: You can read more of Jim’s writings about the Bad Lands at theprairieblog.areavoices.com]